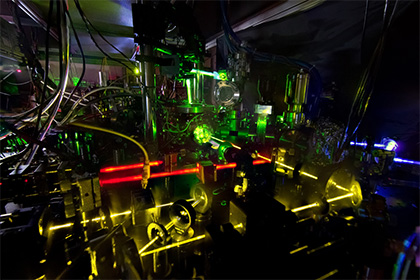 Physics from the National institute of Standards and Technology (USA) broke the record of stability of operation of the atomic clock.

“We eliminated critical type of noise in the course of work of hours, effectively doing a clock signal is stronger” — the coauthor of a research Andrew Ludlow told. According to him, on the new watch clock instability can reach 1,5 parts on quintillion (1 with the subsequent 18 zero) for several thousands of seconds.

At the heart of the device created by scientists two ensembles from five and ten thousand atoms of ytterbium fixed in an optical trap lie. Measurement of time is performed by means of the laser monitoring transition between various energy conditions of quantum system.

New achievement not much more exceeds the previous similar record which is also delivered by the American scientists from the National institute of Standards and Technology.