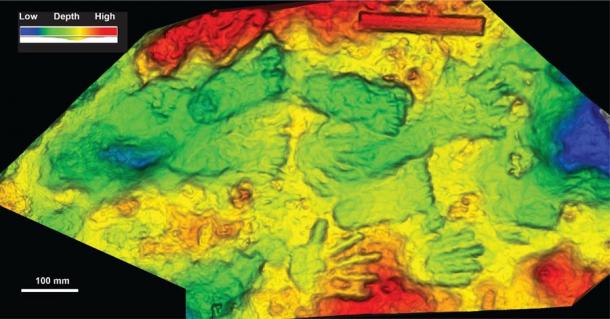 Until now, archaeologists believed that about 40,000 years ago, early Homo sapiens were the first species to begin applying pigments to cave walls with their hands and fingers. However, long before humans created artistic forms with their hands in Europe, foot and handprints were left on the dirt and cave floors all over the world. The problem has always been determining which ones were left by accident and which ones were intentional works of art.

Science Direct has published a new research paper detailing a set of child hand and foot prints found at Kesan, high on the Tibetan plateau. Professor David Zhang of Guangzhou University discovered hand and footprints made on travertine (earthy limestone) that flowed from a geothermal spring. The limestone on which the prints were found dates from 169,000 to 226,000 years ago (Middle Pleistocene). Thus, the child’s prints are said to be “the oldest example of prehistoric art ever discovered.” 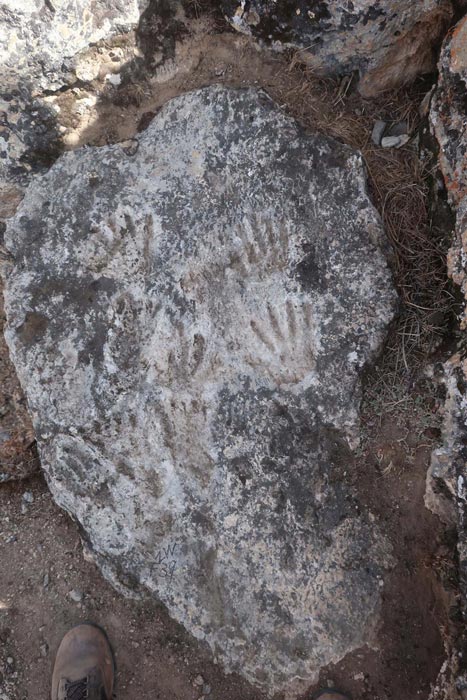 The prehistoric art of the hand and footprints appears to have been deliberate.

If Professor Zhang and his team’s dating of the limestone is accurate, this find truly represents the earliest evidence of intentionally made prehistoric art. In a new paper, the research team explains that they have called the prints “wall art,” a term usually applied to cave paintings and to drawings and engravings left on the walls of rock shelters. The new samples of Tibetan prints were not found in the cave, but because they were found on rock, they best fit the archaeological category of “parietal art.”

The team used a number of non-intrusive methods to record hand and footprints of fossil humans from Kesan. They then created a 3D relief model in the lab to visualize the skin lines of the prints. Radiometric dating methods were used to analyze the decay rate of uranium samples found in the limestone. After completing all the tests, the team determined that the prints were made between “169,000 and 226,000 years ago.”

The scans found that two children left a total of five handprints and five footprints in the soft travertine limestone, which later hardened into stone. It is estimated that the child who left the footprints was probably “about seven years old.” The second child who left handprints was estimated to be slightly older, 12 years old,” the article said.

Although it was thought that the prints might have been made “by accident,” evidence was found that led the scientists to conclude that they were “carefully placed” by the two children. The researchers wrote in their paper that the ancient prints “were not left during normal walking and appear to have been placed intentionally.”

Professor Zhang said the discovery was “absolutely incredible when you remember how high altitude it was made.” It was exceptionally cold in Kesan, located at an altitude of more than 4,200 meters, not the kind of place one would expect to find “the oldest example of prehistoric art in the world.”

Researchers believe that the children were probably Denisovans. Although you associate Denisovans with “Denis Cave” in Siberia, in 2010 a team of scientists analyzed a jawbone discovered in western China 150,000 years ago belonging to a Denisovan. The so-called “lower Xiahe jawbone” was originally found in 1980 in the Baishia karst cave in the Tibetan Plateau.