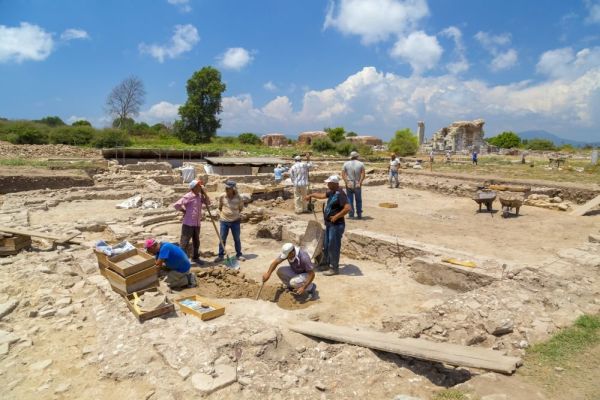 In Turkey, archaeologists excavating the archaeological site of Kultepe, in the central province of Kayseri, have discovered more than a dozen statuettes of ancient gods and goddesses worshiped by Anatolians thousands of years ago.

According to the Daily Sabah, this place is also known as Kanesh. Here was the city of the mysterious Hittite empire, which was one of the most powerful in its time. It is believed that this city was the first founded by the Hittites in Anatolia.

For the first time, archaeologists discovered figurines of idols here in 2017. The current field season has expanded their collection. This year, researchers have discovered 15 more idols – figurines of some gods and goddesses, whose age is about 4500 years.

According to Professor Fikri Kulakoglu of Ankara University, who is in charge of the excavation, the figurines are made in different styles. Some of them are cut out quite simply, schematically. Other deities are made in detail, some of them being depicted seated on a throne.

“The structure we have unearthed is probably a very large and unique site in Anatolia with formal and religious characteristics,” says Professor Kulaoglu. “The idols found here are artifacts that demonstrate the Anatolian people’s beliefs in the creatures they worshiped 4,500 years ago. These are artifacts that are not found anywhere else but Kultepe. ”

According to him, after examination, all found statuettes will be transferred to the museum of the city of Kayseri to organize a temporary exhibition. Note that excavations began here 72 years ago. They are being conducted on a site located about 24 kilometers from Kayseri.

Since then, archaeologists have discovered many administrative buildings, places of worship, houses, shops and workshops. However, they knew about this city at the end of the 19th century. It was then that stone tablets with texts appeared on the “black market”, in which the Hittite city of Kanesh was mentioned.

Two of them ended up in museums and interested archaeologists. They began to search for the lost city. Luck smiled at the mission from the Czech Republic, which found not only the city, but also excavated the palace, however, damaging about a third of it, and also found new tablets with texts.

By the way, archaeologists literally exchanged many of these tablets from local residents a century ago. For example, in one case, such a tablet was “bought” for a quinine tablet. At that time, there was an outbreak of malaria in the region.

The texts were taken to Europe, where scientists were able to decipher them. It was then that it became known about the history of the city of Kanesh. The tablets were returned to Turkey in 1936. Since then, they have been kept in the Istanbul Archaeological Museum.