In Turkmenistan, an unusual arthropod “troglodyte” 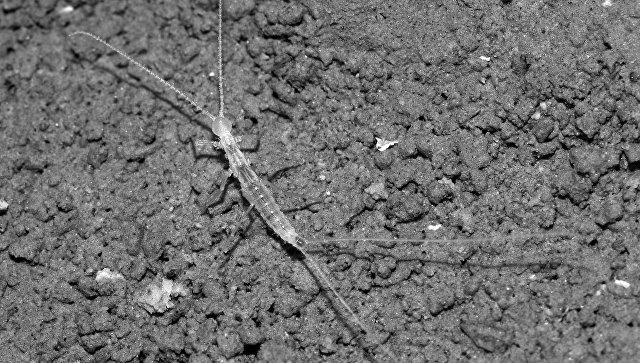 Naturalists found in one of the caves at the foot of Mount Koitendag in Turkmenistan an extremely unusual arthropod creature adapted to life in total darkness, and published photographs of this “troglodyte” in the journal Subterranean Biology.

“This is not only an extremely unusual living being, but also a very amazing cave dweller who had to go through a very long evolutionary path in order to adapt to life underground in Central Asia,” said Alberto Sendra, an entomologist from the university Alcala (Spain), who opened the “troglodyte”.

Virtually all the large caves on Earth are inhabited by countless animals, many of whom have adapted to life under the Earth to such an extent that they can not now survive beyond the walls of their caves. As a rule, all such living things have a bizarre appearance, an unusual diet and behaviors.

For example, eyeless fish, living in lakes in many large caves in Russia and America, lost the “sense of time” and now their body believes that in 24 hours, not 47 hours. Millipedes Geophilus hadesi, living at a depth of about a kilometer under the ground, are adapted to a low concentration of oxygen in the cave air, and getting to the surface can end up extremely dire for them.

Sendra and his colleagues found another extremely unusual representative of the “underworld”, studying the flora and fauna of three hundred caves located on the slopes of Mount Koitendag in the east of Turkmenistan.

In one of them, which locals call Kaptarkhan, the “house of pigeons”, scientists managed to discover a new species and genus of cave arthropods from among the so-called two-tailed, small predatory creatures with characteristic “pincers” on the tail, luring its inhabitants from their shelters with the help of pieces of cheese.

This creature, named Turkmenocampa mirabilis, “an amazing twin-bird from Turkmenistan,” was an unexpected find for entomologists, since twins do not actually occur in the arid Central Asia because of their hygrophilous and unadapted life in the desert. The question arises – how could they get into the cave and gain a foothold there?

In the near future, scientists plan to begin the search for this “troglodyte” in other caves of Turkmenistan and neighboring Uzbekistan and Afghanistan. The discovery of other such creatures will help Sendra and his colleagues understand how the twins could get into the caves of Central Asia, survive there and adapt to the harsh conditions of life in them.