In Yugra have found a skull of an ancient rhinoceros 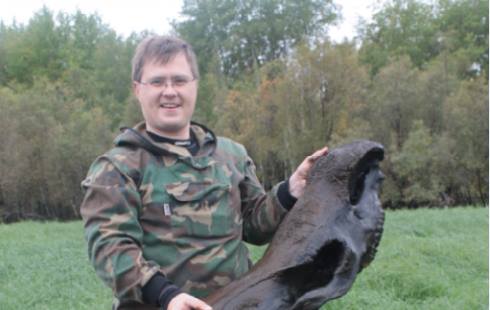 Paleontologists found traces of stay of the ancient person almost on four hundred kilometers to the north, than it was considered earlier. Such conclusion is drawn by results of expedition to Oktyabrsky district. Last year near the village of Chemasha the large location of bones of a mammoth was revealed. There was a hope that here, as well as on the well-known Lugovsky location, traces of stay of the person will be shown too.

– We found stone artifacts in the form of otshchep is what remains after handling of a stone, the head of department of paleontology of the museum Anton Rezvy says. – Also the fragment of a tusk of a mammoth on which traces of his handling by the person are well visible was found. For primitive people it was the great material of which it was possible to make various products – from utilitarian things to jewelry. The archeologist, the specialist in a paleolith from St. Petersburg Sergey Makarov highly appreciated the importance of finds which confirm: in the Stone Age in these parts there lived people.

The expedition organized by Museum of Nature and Man carried out prospecting excavation in Oktyabrsky district to determine the area of location of Komudvana as this paleontologic object officially hereinafter is referred to as. It is only initial stage of studying, work will be continued next year.

But it is not the unique expedition which paleontologists visited this summer. Sometimes they should get into such solitude that on the road nearly a half of the allowed time leaves. This time it was lucky: gas workers threw with the helicopter complex expedition as a part of which there were paleontologists and the biologist, in upper courses of North Sosva. Were back independently alloyed by rubber boats. Researched Ust-Manyinsky location near the village of the same name in Berezovsky the area.

According to Anton Rezvy, the place surprising – rocky coast, traces of a lava of ancient volcanoes, rainfall of the ancient sea, sandstones, limestones, clay deposits come across. Here prints of plants, the animals living in the ancient time remained.

– From the point of view of paleontology east slope of the Ural Mountains is provided in science not so widely as western, – Anton Rezvy says. – Researches were conducted by geologists in the 1950-1960th years, since then results weren’t updated, actually this white spot. We only began to study the territory, and new groups of organisms which didn’t meet earlier are already found, – ancient fishes, worms, sponges. The collections of flora and fauna collected on Ust-Manyinsky location attracted great interest from scientists. One of them, the specialist in ancient worms from Moscow Alexey Ippolitov will make the report on the forthcoming Yugra Biennial. Under the general name “worms” several groups of animals not related among themselves are brought together, from some there were others – mollusks, arthropods. In fact, hearts give us a basic information about evolution of different groups of animals who live on Earth.

Hantymansiyets will provide one more report on the field Yugra Biennial in a co-authorship with the scientist from Paleontologic institute Evgenia Sychevskaya. A subject – ancient fishes. In recent years even more often find their prints. So was as when studying Ust-Manyinsky location in Berezovsky the area, and for hundreds of kilometers from this place – near the settlement Bobrovsky of the Khanty-Mansi district. The case helped: a few years ago paleontologists studied the territory from the point of view of finding of traces of mammoths here and absolutely accidentally found a print of ancient fish age about 23 million years. According to paleontologists, on this place there was a fresh-water lake where ancient ancestors of modern pikes, perches, sturgeons were found. On the found print of a perch it is visible that it was the huge sizes – more than a meter in length. Also here large fragments of a skull of a pike, a burbot are found.

This year studying of the Lugovsky location of ancient animals opened more than twenty years ago and which became the world sensation continued: here found the vertebra of a mammoth broken by a spear of the ancient person. Every year Lugovskoye presents the museum with new artifacts, but this time excavation as such wasn’t conducted. Specialists were concentrated on establishment of borders of an archaeological monument, for this purpose it was necessary to dig holes on perimeter. But also here they were waited by unexpected finds: traces of handling of a stone by the ancient person and tooth of a mammoth are found in one of holes.

At art dealers and the staff of directorate of especially protected nature sanctuaries the idea ripens long ago: within an archaeological monument “Location the Lugovsky” which is protected by the federal law, and a nature sanctuary of regional value “Lugovsky Mammoths” to organize an ecological track which could tell a lot of things not only about the modern nature, but also about ancient times, mammoths, primitive people. There will be an ecological track – the flow of tourists will increase. Today party travels on Lugovskoye – an unusual occurrence, though this territory – logical continuation of an excursion route: the museum Lugovsky location. 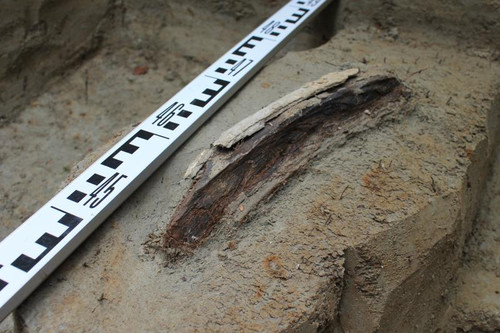 In the district there is one more place where big accumulation of bones of mammoths is noted, it is the small river Matkinskaya in the Khanty-Mansi district. Here this summer Anton Rezvy and the archeologist Sergey Makarov went. The nature presented them a gift of which they could only dream: on the bank of the small river found perfectly remained skull of an ancient rhinoceros who lived in these parts 15-20 thousand years ago and disappeared as a species as a result of warming of climate. However, the skull has no lower jaw, but it doesn’t belittle the importance of a find at all. Skull weight – at least ten kilograms, teeth in great condition, will come time, and the authentic sample of ancient fauna will take the place in an exposition of the museum.

Plants of a preglacial era

In recent years the museum practices complex expeditions in which paleontologists, biologists archeologists participate. For example, paleontologists invited with themselves for a research of Ust-Manyinsky location of the biologist – the senior research associate of department of the nature Nadezhda Korikova. If paleontologists paid attention to prints of plants of the Devonian Period, and it 350 million years ago, then the biologist was busy with search of rare species of plants. On rocky exposures and taluses rare species of ferns, камнеломок, in the coastal woods of a thicket of a peony, a glade of orchids meet.

Staff of department of the nature collects collections of plants since 2007, and studying of the nature of the Subpolar Urals began with the 2008th.

– This amazing place – both on beauty, and on a variety of vegetation, – shares impressions Nadezhda Korikova. – Exactly here a large number of rare species of plants meets. Most of them got to the first release of the Red List of Yugra in 2003. Each ten years the list of types is reviewed taking into account constantly conducted researches. In release of 2013 there are already links to data of our museum researches on new points of finds of rare species in mountains of the Subpolar Urals. Here plants which lived during a preglacial era remained. For a museum herbarium we collected already more than 240 types, this year it was replenished with 15 more types of new plants.

This year together with the staff of the museum two botanists from the Surgut university which has the biggest herbarium in the district – 15 thousand storage units participated in expedition. The museum has a purpose – to collect a full-fledged collection of plants from all territory of Yugra that each area, and also information on all herbariums which are available in the district was in full provided. The first herbariums which are stored in the territory of Yugra were created in the reserves “Yugansky” and “Little Sosva Nature Reserve”, there are they and in natural parks, but in general cover an insignificant part of the territory of the district. As it is accepted in the capitals of territorial subjects of the federation, our district has no a general collection yet.

– We are engaged not only a museum herbarium, but also collection of information about collections of plants which were created and stored in the territory of the district, – Nadezhda Korikova says. – The subject of history of the researches conducted in Yugra is very interesting to us. It is no secret that herbariums from our territory are stored in the different countries of Europe, in St. Petersburg. And there is no wonder: in the 18-19th centuries there came Danes, Germans, Swedes here and took away collections of plants. It would be interesting to find gerbarny samples of such collections, to obtain primary information, to photograph, tell and show to yugorchana as researches in Siberia were conducted 100-200 years ago. For example, the herbarium collected in 1911 near Tobolsk is stored in Novosibirsk in the Herbarium of M. G. Popov.

… Expeditions which will be annually organized by Museum of Nature and Man help to fill up its collections, to conduct research work and to please us, visitors, with unique exhibits, for example in the form of a huge skull of an ancient rhinoceros. Such animals, it appears, too lived on this earth, and orchids grow here still.