Incredible: did tyrannosaurs live in flocks?

The most formidable predators of the Mesozoic may not have been proud loners. They could live and hunt in packs like wolves.

Tyrannosauridae are a family of carnivorous dinosaurs that walked on two legs. In the Cretaceous period, they were the largest predators of the supercontinent Laurasia. The famous Tyrannosaurus rex belongs to this family – the largest land-based predator in the entire history of the Earth.

Most experts believe that tyrannosaurids were solitary, like modern tigers. Among other arguments in favor of this conjecture, the brain of these reptiles is small compared to the size of the body: it is believed that they literally would not have enough brains for a complex social life.

Meanwhile, about 20 years ago, in the Canadian province of Alberta, the remains of more than a dozen tyrannosaurids were discovered, apparently killed simultaneously and next to each other. Then some researchers started talking about the fact that these predators could live in flocks. However, most experts were still skeptical. Indeed, it was difficult to draw far-reaching conclusions from a single find.

Later, another such “mass grave” was found in the United States, in the state of Montana. But it did not convince skeptics either.

Finally, seven years ago, the third “mass grave” of tyrannosaurids, presumably of the species Teratophoneus curriei, was discovered in the United States in Utah. However, critics noted that these ancient lizards could die in different places. And only then the bones could be collected in one place by some natural process (for example, by the flow of a river).

The authors of the new study refute this version. They analyzed the content of various isotopes and rare earth elements in the bones of ancient reptiles. The conclusion of scientists is unambiguous: the tyrannosaurids found in Utah come from the same area.

Most likely, they were killed by a flood caused by heavy rains. However, scientists do not discount the version of a natural fire. Poisoning by water, in which cyanobacteria have multiplied, is also possible (this also happens in our time with both wild and domestic animals).

The bones of the dead tyrannosaurids fell into the lake, where they rested until a river broke through the reservoir. She took the remains with her and, so to speak, reburied them. For tens of millions of years, other metamorphoses have occurred with the fossils. The experts had to work hard to restore their history. 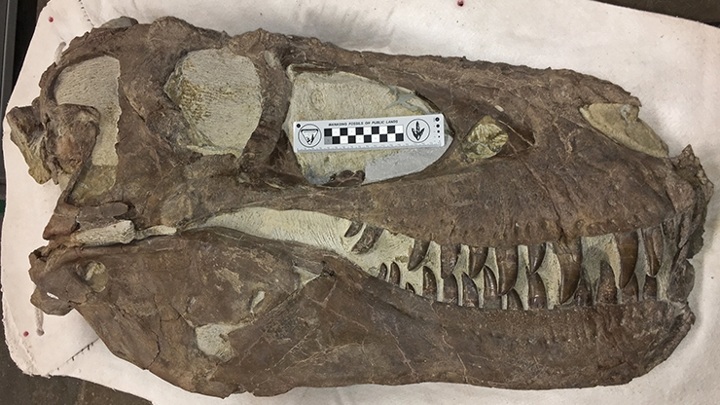 The skull of a tyrannosaurid dinosaur found in Utah, USA.
Photo by Bureau of Land Management.

However, it can now be considered established that these individuals of the species T. curriei lived in the same area and, possibly, at the same time. Another question is whether the gregarious behavior was typical for them. It is possible that some kind of crisis, such as abnormal weather, forced the predators to group, although they usually preferred solitude.

On the other hand, the third such find is already suggestive. Moreover, the tyrannosaurids from Montana belonged to a different species – Daspletosaurus horneri. So was not the spirit of collectivism inherent in all members of the family, not excluding the famous tyrannosaurs?

If so, then paleontologists may have underestimated the intelligence of these creatures. What if the largest land-based predator of all time was smart and hunted in packs as well? It’s hard to imagine anything more frightening than a pack of smart tyrannosaurs. Perhaps not so bad that they became extinct.

A scientific article with the results of the study was published in the journal PeerJ.