Indian water was recognized to be deadly to humans 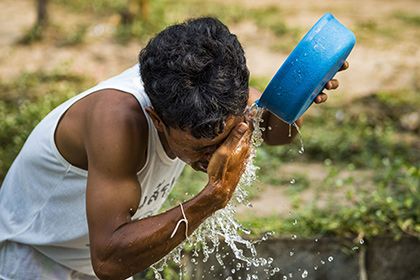 An international team of geologists called the main threat that is hanging over consumers of water in Indo-Gangetic basin. A study published in the journal Nature Geoscience.

The people of Pakistan, India, Nepal and Bangladesh are threatened by depletion of water resources and their pollution toxic waste. About 60 percent of groundwater at depths up to 200 meters in the basins of the rivers Indus, Ganges and Brahmaputra contain abnormally high concentrations of salts and arsenic.

This makes the fluid unsuitable for use for drinking or for agricultural purposes. Satellite observations have shown that in recent years the level of groundwater in the region decreases. This circumstance was considered one of the main threats to the population living in the Indian subcontinent.

Scientists made field measurements of samples in river basins showed that the groundwater level on average has remained stable. He falls to 30 percent near large cities that subsequently kompensiruet support from surrounding sources.

On the Indo-Gangetic river ecosystem accounts for a quarter of world extraction of ground water used by 750 million people in Pakistan, India, Nepal and Bangladesh.