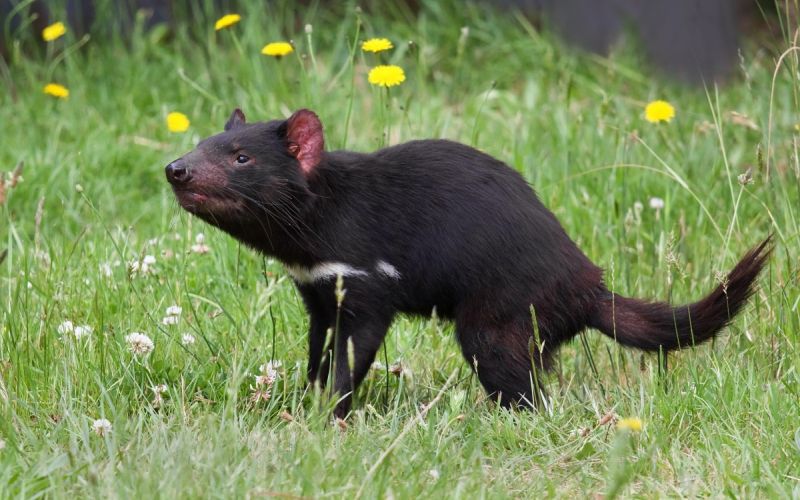 An international team of geneticists has found that the contagious Tasmanian devils cancer DFT1, one of two varieties of DFTD, is actually caused by five different types of tumors that scientists did not know existed before. The results of their research were published in an article in the journal PLoS One.

“The spread of DFT1, as well as the subsequent appearance of the second variation of this disease, DFT2, has put the Tasmanian devils on the brink of extinction. We hope that our findings will help to better predict the course of the epidemic and assess how effective the measures to save devils that we are developing will be. “, – said Elizabeth Murchison, a professor at the University of Cambridge (UK), whose words are quoted by the press service of the magazine.

Scientists currently believe that DFTD, a contagious cancer, began to spread among Tasmanian devils, small marsupial predators, around the mid-1990s, wiping out up to 95% of their population in the first two decades of this century. Four years ago, Murchison and her colleagues discovered that there are actually two DFTD cancers, DFT1 and DFT2, that spread in parallel.

The discovery, as Professor Murchison and her colleagues note, has led scientists to wonder if there are other forms of DFTD and how the disease could have split into two separate lines of cancer cells with different sets of mutations. To answer these questions, biologists collected and analyzed the genomes of over 600 samples of DFT1 tumors extracted from devils’ bodies between 2003 and 2018.

Having deciphered the genomes of cells from each such neoplasm, the researchers compared sets of small mutations in them, tracing the family ties and possible evolutionary paths of this variant of the infectious cancer of the Tasmanian devils, whose common ancestor, presumably, was a sick female who bit the first victim of DFTD in the mid-1990s.

These sets of mutations were further compared with how the genomes of infected Tasmanian devils were arranged, which allowed them to understand which of the “typos” in DNA were directly related to the evolution of cancer and its adaptation to spread from one individual to another.

An analysis of all these data indicated that at the turn of the century there were not two, but five varieties of DFT1, which had their own sets of mutations. Two of them, designated D and E, managed to spread only among a small number of animals, after which they became extinct. The other three, A, B and C, continue to spread across different regions of Tasmania. They account for about 99% of the dead marsupial predators.

In turn, a comparison of the genomes of these three types of tumors shows that the common progenitor of all existing DFT1 lines originated in the northeast of the island, after which it spread to the central and eastern regions of Tasmania, where the number and density of the population of Tasmanian devils was especially high in the late 1990s. -s. After that, it split into five lines, which began an independent history of distribution.

Despite significant differences in their genomes, the scientists were able to identify several common mutations characteristic of all three existing DFT1 subtypes and making their cells almost invisible for the immunity of new victims of infectious cancer. Other common mutations increase the ability of cancer cells to divide and migrate.

Further study of these “typos” in the genes of Tasmanian devils, Murchison and her colleagues hope, will help to understand how to protect surviving marsupial predators from infection with DFTD, as well as create the first effective treatments for the disease. In addition, scientists plan to conduct a similar study for DFT2, whose ancestor was another Tasmanian devil, who, presumably, was a male.