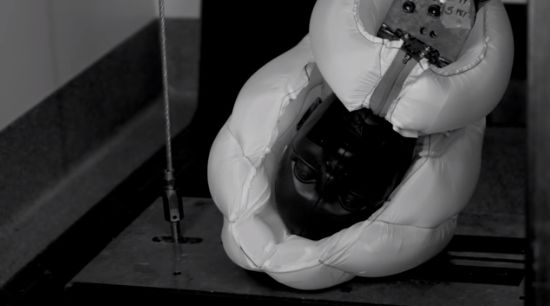 Experts from Stanford University have developed a new type of helmet for cyclists, which better protects the head compared to others on the market helmets based foam.

Unlike traditional helmets new helmet designed on the principle of airbags. It is fixed in the neck during the accident envelops the head. According to the developers, the usual helmets protect against skull fracture, but not save a man from a concussion. Experiments, during which the helmet with the head of the dummy caught on a metal platform with two-meter height, showed that the new helmet softens the blow six times better than traditional bike helmets.

Another advantage of the new helmet, according to experts, in his stealth. It is attached in the area of the gate. This approach should be of interest to those cyclists who do not wear a helmet for aesthetic reasons.

A new helmet has one serious drawback. He rescues the person only when the maximum filling the air. During the experiments the pressure inside the helmet was maximum. The developers assume that if you drop a helmet may not fully inflate, and then the person at risk to more serious injuries than if he was in his usual bike helmet. The current version of the helmet is inflated by a chemical reaction that, according to the researchers, it is not always guarantees obtaining the maximum pressure in the cushion.

Recall, a few years ago, the Swedish designers Anna Haupt and Teresa Alstin presented a similar airbag for motorcyclists and cyclists, called the Hovding, which is inflated in the fall.