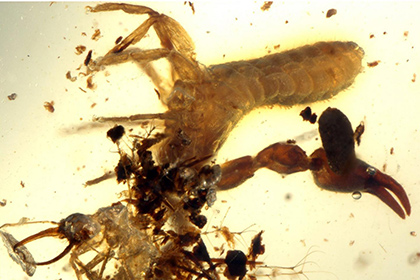 Paleontologists have found that the insects of the Cretaceous period, actively used the camo — they were covered with clumps of dirt, leaves and even the exoskeletons of its victims. To date, arthropods have lost these skills. This was reported in the journal Science Advances, and briefly about the research tells Live Science.

To understand how widespread in Mesozoic (early Cretaceous period) was the camouflage in arthropods, Bo Wang (Wang Bo) from the Nanjing Institute of Geology and paleontology bypassed the scientific collections of China and amber markets of Myanmar in search of caught in the resin insects. Only 300 thousands of samples from Myanmar, as well as several dozen from France and Lebanon, the researchers found 39 individuals with “cargo”.

In many cases, on the back of the insect visible a kind of “bushes” — the recycle bin for objects. Most often clay and leaves are found only on the back, said Wang: that is, it is not incidental impurities trapped in the amber along with the animal, and purposefully taken the goods.

One zlatovlaska at the time of death bore the exoskeletons of staedke and psyllids. Apparently, the predator was first consumed the entrails of their victims, and then used their skins to camouflage for hunting. In addition, the researchers found campfireusa chinarov and ant lions. According to Wang, the insects have mastered the art of masking another 130 million years ago, before the era of flowering plants.

In 2014, German and Chinese scientists found the OS is unprecedented in the world of insects is a strategy to protect their nests: in one of the outer tiers of nests they lay the corpses of ants. The new species was named ossuary OS (Deuteragenia ossarium), in honor of ossuaries (containers for burial of the bones of the dead).