Inside the pyramid of Cheops found a secret room 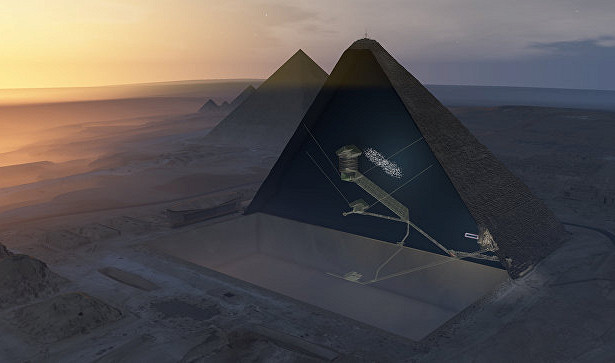 Physicists have found in the pyramid of Cheops a previously unknown area of ​​emptiness, which can be a secret tomb or passage into it.

“When we saw this zone of emptiness, we realized that we had come across something very interesting and big, abandoned all other projects and concentrated on studying this area, right above the corridor, into the tomb of Cheops. Now we are sure that it really exists, and this the first discovery of this kind in the pyramid of Cheops from the Middle Ages, when it was opened by the Caliph Al-Mamun in the 9th century, “said Mehdi Tayubi from the HIP Institute in Paris, France.

The pyramid of Cheops, one of the seven wonders of the world, was built in the middle of the third millennium BC, during the time of Pharaoh Khufu (Cheops), representative of the fourth dynasty of the Ancient Kingdom, at the same time as all the “great pyramids” of Ancient Egypt. This structure, 145 meters in height and 230 meters in width, remains one of the tallest and largest structures ever built by mankind.

Every second in the upper layers of the Earth’s atmosphere millions of muons are formed-charged particles that arise as a result of the collision of cosmic rays with gas molecules in the air. These collisions accelerate the muons to near-light speeds, so they penetrate tens and hundreds of meters deep into the surface of the planet. As shown by the scientists, every square meter of the Earth’s surface absorbs about 10 thousand of these particles.

French archaeologists and physicists, together with Japanese scientists, adapted telescopes capable of “seeing” muons, to search for voids and hidden spaces in monuments of ancient architecture.

At the end of October, the press service of the HIP Institute reported that archaeologists and physicists discovered two, as they put it, “inside the pyramid of Cheops”, “previously unknown emptiness,” which could be the secret rooms where the remains of Pharaoh Khufu lie.

“Successfully testing the muon scanner on the Snofru pyramid, we used it to test two suspicious zigzag clutches on the slopes of the Cheops pyramid.In June 2016, we installed plates with a photo emulsion in the corridor under these chevrons and 67 days later they were sent to the Nagoya University for analysis “, – say the archaeologists.

Both suspicious structures in the pyramid of Cheops, as shown by the analysis of photographic plates, contain significant voids, which are clearly visible in the muon “photos”, and in their existence there is no doubt. One of these “previously unknown voids” is on the northern wall of the pyramid, and it, according to archaeologists, can be a corridor that goes deep into the pyramid. The second, smaller emptiness, is in the north-eastern part of the pyramid.

Egyptologists from the AERA collaboration have previously found out how the courses in the pyramid of Cheops were constructed, and restored the security system that protected the tomb of the pharaoh from the tomb robbers.

According to scientists, the tomb of Cheops was protected from robbers by two levels of protection. The first of them was at the entrance to the very tomb of the pharaoh – it was closed by three monolithic stone slabs that were raised above its entrance with the help of systems of grooves and blocks, and probably were held in place by some props.

The second obstacle for thieves was established in the so-called inner sanctuary, inside which was the entrance to the tomb of Cheops. The entrance to it was closed in a similar way, with the help of stone slabs that were lowered down through the grooves and canals within the walls of the pyramid.

Egyptian archaeologists in early October began clearing the entrance to an unknown tomb, which was found on the west bank of the Nile near the city of Luxor, said the head of the department for the affairs of antiquities Luxor Talaat Abdul Aziz.

“The front door is damaged by time, works are being done to clear the entrance and get into the tomb to determine its age and the name of the person for whom it was built,” he said.

Some time ago, scientists discovered in the same area a tomb of an ancient Egyptian gold trader, which is about 3.5 thousand years old, as well as mass burial of the poor era of Ancient Egypt.

Scientists in late August found a huge monastic complex near the town of El Minya, the find dates from the 5th century AD.

Archaeologists have found a lot of burial chambers, the total area of ​​which is 3500 square meters. In addition, scientists unearthed the remains of monastic houses made of clay.

“This fact suggests that the archaeological site near the (monastic) necropolis of Al-Nassar was a complex of monks,” says Gamal El-Semestvawi, head of the Egyptian Antiquities Authority.

It is believed that Christian monasticism appeared in Egypt around the beginning of the fourth century AD. The Church recognizes him as the ancestor of St. Anthony the Great.