“Invasion” of crabs was observed along the coast of Panama 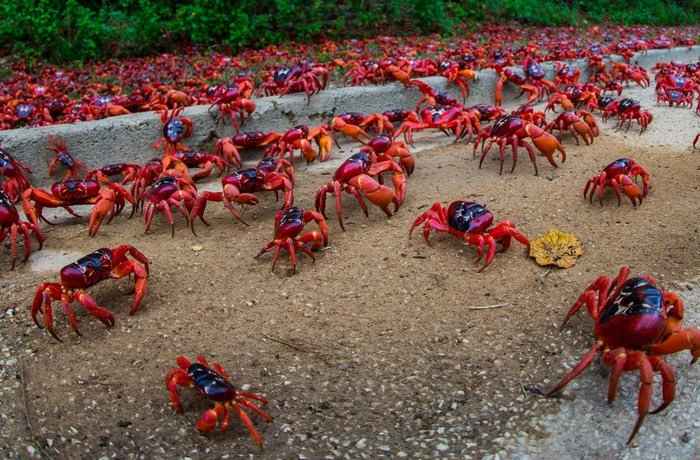 The scientists conducting a research along the coast of Panama shot unprecedented video. Thousands of red crabs a swarm float on the waters deprived of oxygen directly over a seabed. The first thought which comes to mind in case of viewing a video — alien invasion.

Video was shot on the underwater mountain of Hannibal along the coast of Panama under the leadership of Jesus Pineda from Oceanographic society Woods-Houla a year ago. The roller causes vague alarm — the huge number of red crabs slides on a seabed as if beings descended from the screen of some mad sci-fi movie.

Here is how Pineda described process of shooting in the statement: “When we plunged on a submarine, noticed that water became dark at a bottom. It was the muddy layer, and behind it nothing was visible. We saw only this cloud, but had no idea of what generated it. When we slowly moved to a seabed, these beings appeared. At first we thought that it is biogenous breeds or educations. They moved a swarm as insects, and we couldn’t believe in it”.

Crabs were observed along the northwest coast at a depth of 355-385 meters in the field of hypoxemic (with low content of oxygen) by waters.
Observation is unique doubly. First, this type of crabs was never seen so far in the south. They usually live at beaches of Baja California and along California Current. Therefore this region became new territorial border for types. Secondly, we dig strange travel earlier never were observed at red crabs.