Is the formation of a new continent on Earth? 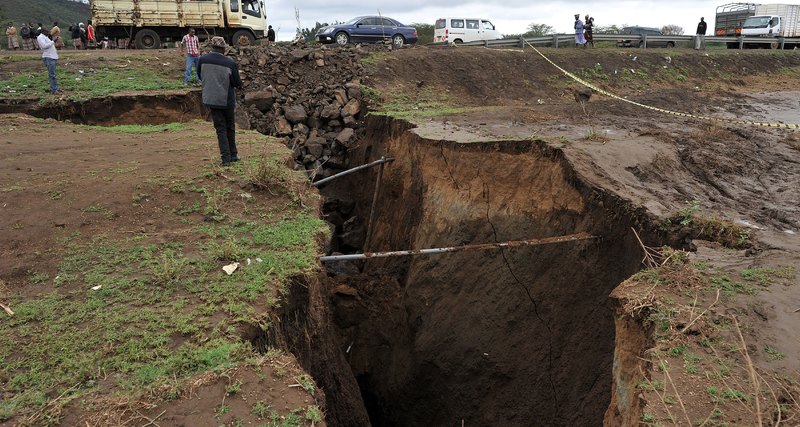 A huge crack in the earth suddenly appeared in southwestern Kenya, and it may be the first sign that Africa will eventually split into two continents. At least, this version exists for some scientists.

The local information source Daily Outlet says that the crack in some places reaches in depth about 15 meters, and in width – 20 meters. Its length is several kilometers. It appeared in the East African rift valley, which runs from the Horn of Africa to Mozambique itself. And in this valley there are many weaknesses.

They are caused by the movement of the earth’s crust, and in such places cracks and ruptures arise. According to a local article, usually such cracks are filled with volcanic dust from Mount Longonot, located nearby, but a recent shower has blurred the entire layer, and now the crack opened.

National Geographic notes that the gaps in this territory are becoming more massive, as the two tectonic plates, Somali and Nubian, are moving away from each other. Over time, they can disperse completely, but it will happen somewhere for 50 million years. Such gaps may indicate the beginning of a continental fault and the beginning of the formation of a new oceanic basin. This process is similar to the fault, during which Africa and South America appeared.

But not everyone is convinced of such a radical theory. Forbes notes that in this area there was no evidence of recent earthquakes. The Geological Survey of Kenya believes that the crack was formed due to a subterranean stream that arose due to heavy precipitation that fell after a prolonged drought and caused soil erosion. True, why does not such a big service crack clarify.

Whatever the reason, this phenomenon has already caused a lot of concern to local residents. Because of it, part of the highway has already collapsed, and families living near the crack begin to evacuate, fearing for their safety.