Israeli underwater archaeologists raised from the bottom of ancient artifacts 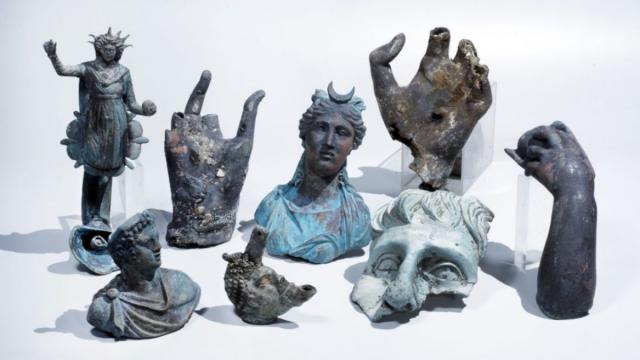 Israeli underwater archaeologists raised from the bottom of a whole collection of bronze artifacts that were on Board an old trading vessel. The ship sank near the present-day National Park Caesarea 1.6 thousand years ago. The ship was caught in a storm and crashed on the rocks.

Among the items discovered – a rare bronze statues and thousands of coins. According to archaeologists, this is one of the most significant discoveries in Israel over the past 30 years. One of the interesting finds is a bronze lamps with the image of the Sun God Sol, the goddess of the moon and heads of the African slave. In addition, divers were found several objects depicting animals.

On the site of the shipwreck were discovered shards from the large vessels used for transportation of drinking water for members of the team. During surveys of the seabed, archaeologists also came across two piles of coins, to preserve the shape of the vessels in which they were. The total weight of thousands of coins amounted to about 20 kg. On the coins depicted the Roman emperors Constantine the Great and Licinius.

According to representatives of the Israel antiquities authority, all the artifacts have a very good safety due to the fact that they spent hundreds of years in the sand.