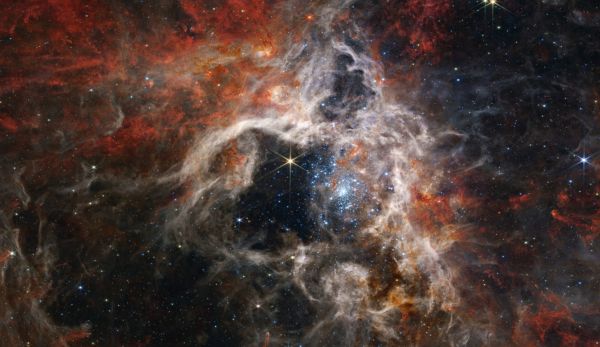 The James Webb Space Telescope has discovered thousands of young stars in the giant star-forming region 30 Doradus in the Tarantula Nebula. In addition to these, astronomers have identified distant background galaxies in the nursery’s observational data, as well as the detailed structure and composition of the object’s gas and dust.

The Tarantula Nebula, located 161,000 light-years away in the Large Magellanic Cloud, a satellite galaxy of the Milky Way, is the largest and brightest star-forming region in the Local Group of galaxies. It is home to some of the hottest and most massive stars known.

One of the reasons the Tarantula Nebula is of interest to astronomers is that it has a similar chemical composition to the star-forming regions seen at “cosmic noon” when the universe was only a few billion years old and star formation was in full swing.

“Despite thousands of years of human observation of the stars, the process of star formation still holds many mysteries, as previous instruments are unable to get clear images of what happens behind the thick clouds of the stellar nursery. “James Webb” has already begun to reveal the Universe never seen before, and these observations mark the beginning of rewriting the history of the creation of stars, ”the participants in the observations noted.