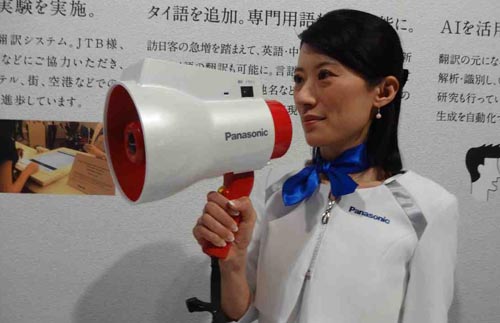 Panasonic developed the device which is capable to recognize the phrase and to translate it into the necessary language. The translation with Japanese into the English, Chinese and Korean languages is already accessible.

Perhaps, the age of translators-simultaneous interpreters comes to the end. At first Skype learned to understand oral speech including in Russian. Now for these purposes adapt gadgets with far smaller, than at the computer or the smartphone, computing power.

The new Panasonic device received the name Megahonyaku – the name is formed from the Japanese words MegaFon and “translator”. With its help it is already possible to translate the Japanese speech into the English, Chinese and Korean languages. So far well to about 300 phrases, it is possible to find the translation of other fragments of the speech in the Internet. The megaphone also turns on the touch screen for input of the text which will also be translated and sounded.

The device is designed for corporate clients. Use will cost them 20 thousand yens (11,8 thousand rubles) a month. Panasonic plans to produce 10 thousand such megaphones in 2018.