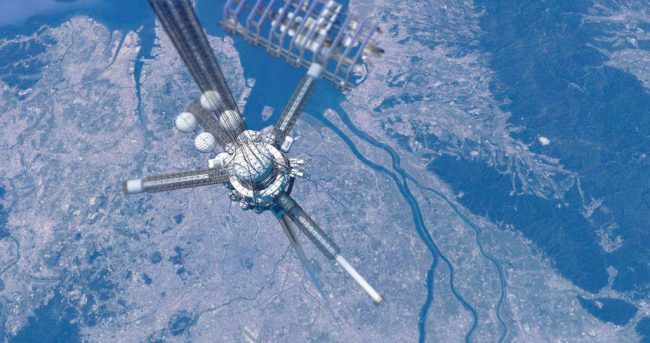 A team of Japanese scientists from the University of Shizuoka, as well as other organizations, is going to conduct the first experiment connected with the idea of ​​developing a “space elevator” – a device capable in theory of connecting the Earth and the space station with a special cable, which in future will open new opportunities in the derivation of useful cargoes on low-Earth orbit, as well as the delivery of people.

Such an experiment will be conducted in space for the first time. Before scientists begin to create a full-fledged “space elevator”, they will have to solve a variety of engineering and scientific issues related to the development of special, high-strength cables, through which the space elevator will rise into orbit. The experiment should be held in the coming days.

In its framework, scientists want to use two ultracompact cube-satellite (10 × 10 cm in size), which will be put into orbit with the help of the H-2B launch vehicle. The satellites will be connected together by means of a 10-meter steel cable, on which an improvised blank will be installed, which acts as an elevator. With the help of this set, the Japanese want to prove the reality of the theory of the “space elevator”.

The essence of the experiment is to stretch the same elevator on a cable, 10 meters long. The wire will be in a suspended state at this time. Kubsat, in turn, is needed in order to keep the cable taut. “Space elevator” will start its journey along the wire from the container, inside which the carrier rocket will bring the satellites into orbit.

The launch of the H-2B launch vehicle with two satellites on board is scheduled for September 11.

The first idea of ​​a space elevator was proposed by the Russian scientist Konstantin Tsiolkovsky in the 19th century. Then, after about a hundred years, the subject was again “picked up” in his work by the British science fiction writer Arthur Clark. In the view of modern scientists, such a device will be able to deliver people and cargo to orbit at a speed of up to 200 kilometers per hour. According to preliminary calculations, the total cable length of a full-fledged space elevator will be about 96,000 kilometers. According to Japanese scientists, the project of building a space elevator can cost the treasury 10 trillion yen, which is approximately the same as the cost of the maglev train project, with which it is planned to connect Tokyo and Osaka. In this case, experts note, the cost of delivering 1 kilogram of weight to orbit using a space elevator is estimated at several tens of thousands of yen (or about 1/100 of the cost of delivering the same volume with the space shuttle).

“In theory, the space elevator is quite feasible. Thanks to such an installation in the future, space travel will be available to a much larger number of people, “commented Yohji Ishikawa, one of the team members of the future experiment.

According to scientists, the most important difficulty in implementing the idea of ​​a space elevator is the development of a suitable high-strength cable, through which this elevator will move. Such a cable should have good protection against high-energy cosmic rays. According to the researchers, carbon nanotubes can be an excellent material for the role of the basis for such a cable. Another task to be considered is the delivery of electricity from Earth to orbit. In addition, we will have to somehow solve the problems of space debris and take into account the factor of possible collision with micrometeorites.