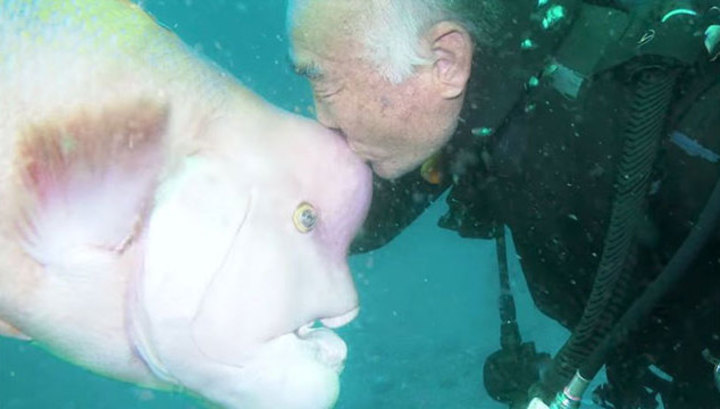 79-year-old resident of Tokyo Hiroyuki Arakawa has been friends with the huge fish called Yoriko, who lives in the underwater temple for almost 30 years. A representative of the family has a large head, which looks like a human. In the late 1980s, the diver Arakawa rescued rapacious fish from hunger and since then Yoriko regularly visits.

Arakawa has dived for many years to the underwater Shinto temple, which is located on the territory of Tokyo. Once he noticed that the huge fish swimming around the structure feels bad. Yoriko was wounded.

The Japanese spent 10 consecutive days five times a day feeding the predator crabs, while the latter did not get better. Since then, Yoriko and Arakawa are inseparable friends.

According to the Japanese, he dives to the temple with a special gong, with the help of which Yoriko is calling. That every time appears and begins to circling around the diver. The fish allows you to touch yourself and even kiss.

Arakawa believes that Yoriko remembers how he once saved her life.