Japanese chemists created the smallest model of Saturn and its rings 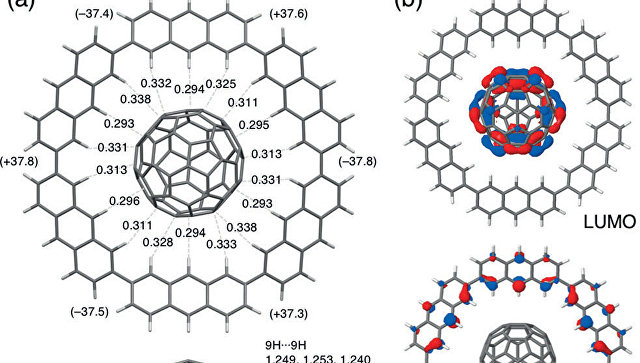 Japanese chemists were able to “reduce” Saturn several million times, creating a “copy” of the fullerene molecule, a nanoshear of 80 carbon atoms, and the surrounding hydrocarbon ring, the article says.

“The stability of such” Saturns “tells us that we can create similar structures inside graphene sheets, using not only fullerenes, but also other complex three-dimensional molecules, which, we expect, will have interesting properties that other functional materials do not have “- write Shinji Toyota (Shinji Toyota) from the Institute of Technology of Tokyo (Japan) and his colleagues.

Fullerenes – one of the forms of existence of carbon in the form of a simple substance, which has become a “visiting card” of nanotechnology. These molecules can be used in a variety of areas – for example, as a nanoscale amplifier in electronics, additives when creating new alloys or the basis for new optical technology.

In particular, fullerenes can be used to create nanodiamonds capable of withstanding the “triple” pressure prevailing in the Earth’s core, various “eternal” lubricants and other super-strong materials.

As Toyota and his colleagues say, chemists have long been trying to use fullerenes as components of other, more complex and interesting molecules within which they could freely rotate, move and perform complex actions. Such designs could serve as a part of engines, hinges and other moving structures of nanomachines.

One of such structures, which scientists call “nano-Saturn” – fullerene, inserted into a large ring-shaped molecule – has until now remained inaccessible to humans.

At best, chemists were able to wrap a very “thick” ring of carbon or hydrocarbons around the fullerene, which made it look like a black hole with a “donut” of the accretion disk, rather than a gas giant with a very thin ring of ground materials from its satellites.

The Japanese solved this problem by inserting fullerene not into an enlarged copy of the molecule of benzene or other aromatic hydrocarbons, but into a kind of miniature analogue of the star of David, whose “rays” consist of a multitude of benzene rings connected to each other in a special sequence.

If such a “star” gets into fullerene, it binds to neighboring hydrocarbon “links” with the help of a multitude of hydrogen bonds that hold the “planet” inside its ring, but do not deform or destroy it.

As scientists note, this structure will have extremely unusual chemical and physical properties due to the large number of such connections and the constant interactions between the “Saturn” and its ring. This will allow the use of such nano-planets as catalysts and components of materials that selectively interact with various components of the environment.