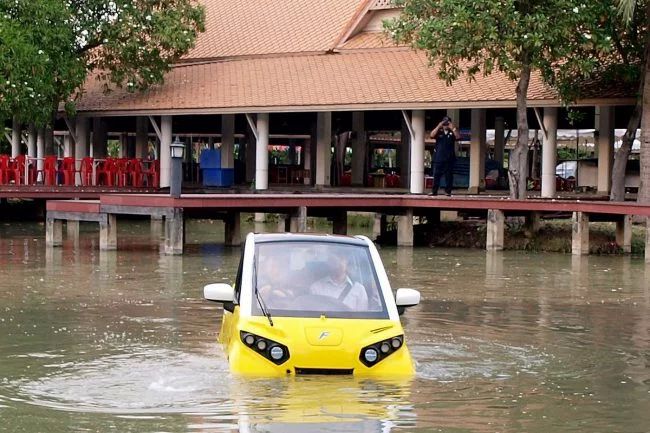 The Japanese inventor Hideo Tsurumaki worked in Toyota, but after the tsunami that hit Japan in 2011, he resigned from the company and decided to create a floating car, which in case of a repeated flood will help save the owner.

After retiring from Toyota Tsurumaki for two years, he created a small, able to swim prototype electric vehicle Fomm. The demonstration model of the car allowed him to attract investors, who gave the engineer money for further development. Now he is already working on the fourth prototype of an electric vehicle, which is capable of driving on one charge up to 160 kilometers at a speed of up to 80 kilometers per hour. Another feature of the car – replaceable batteries located under each of the four seats – so engineers solved the problem with the balance on the water. The car floats on water with the help of the water-jet engine, and turns thanks to wheels of a special design.

Now the developers are trying to reduce the price of the car, so that its price does not differ from the cost of an ordinary car, because not every buyer agrees to overpay for the bells and whistles, which, perhaps, never will. But cars from the first parties will still be quite expensive, the price tag will start from 18 thousand dollars.

Tsurumaki agreed on a future serial production with a plant in Thailand, where he plans to produce up to ten thousand auto-amphibians a year.