Japanese scientists have refuted the theory of Stephen Hawking 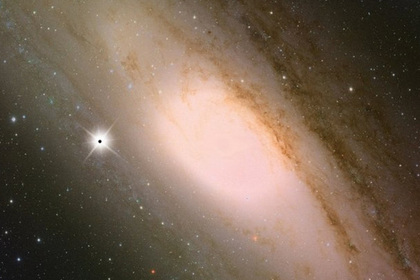 A group of Japanese scientists refuted Stephen Hawking’s theory of the nature of dark matter. The study reports Science Alert.

According to Hawking’s theory, in the Universe there is a group of small black holes formed immediately after the Big Bang, from the cluster of which dark matter consists. They have a small size, but a huge mass: a black hole with an event horizon of 0.1 millimeter should have a mass of 67 quintillion tons. Their existence could explain the mystery of the missing mass of the universe.

With the help of the Subaru telescope in Hawaii, scientists tried to capture the curvature of light from objects, past which black holes are moving. During seven hours of attempts to fix the change in the brightness of the star due to the passage of the primary black hole between the star and the observer, they took 190 pictures.

If Hawking’s theory were correct, scientists could observe the effect of the lens about a thousand times, but they managed to fix only one event falling under the description. Thus, the proportion of primary black holes can amount to no more than 0.1 percent of all dark matter, which refutes the 1971 Hawking article.