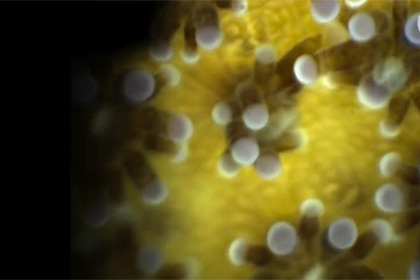 Scientists first tested in the sea underwater microscope with video camera for divers. They were able to capture unexpected features living corals, including “kisses” polyps. This was reported in the journal Nature Communications.

The benthic underwater microscope (Benthic Underwater Microscope, BUM) allows to study the life and behavior of tiny marine organisms in real time. In the latter work, the researchers observed the coral polyps (more than a millimeter in length), how they ate, competed with other polyps and reacted to the invasion of harmful algae.

During a swim in the Red sea BUM has helped me to learn about the unusual behavior of the polyps at night they hugged each other. Scientists do not yet know why the corals do it, but called this behavior with kisses.

In addition, the divers paid attention to aggressive clashes between the colonies of corals of different types of polyps attacked each other with fiber and digestive enzymes. Finally, scientists have observed over the reef, seized poisonous weed, using the weakening of corals due to bleaching.

BUM allows scientists to conduct observations at the distance of 6.4 centimeters from the polyps — so as not to disturb their life. Soft, elastic lens (like the lens of the eye) helps to quickly focus the image and the short exposure time (less than microseconds) reduces image blur.