Ladybug will help create an umbrella of a new type 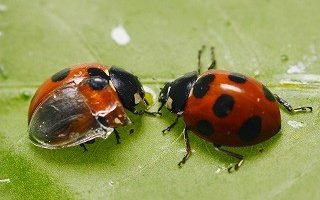 The construction of the modern urban umbrella, according to archaeologists, more than 1000 years. And here the Japanese scientists announced their intention to create a new kind of umbrella, the device of which will help to avoid its undesirable addition inside out in windy weather.

It is curious that a device of the wing of the beetle Ladybird (ladybird) was taken as the prototype of the umbrella device. The fact is that the colorful beetle manages to pack its wings into complex origami-like folds under its shell before opening them into a motionless, durable membrane in flight.

Until recently, however, the mechanisms of the addition of the beetle wings remained a mystery, because no one could see under the outer rigid shell (elytra), how the wings themselves folded. The problem was solved when specialists from the Tokyo University of Science and Industry created rigid elytra from transparent resin and transplanted them to a beetle to provide a “window” in the process. According to them, this will help explain how elastic wings can maintain their strength and stiffness in flight.

Understanding the mechanisms created by nature will help improve the design of umbrellas, satellites, microscopic medical instruments and fans.