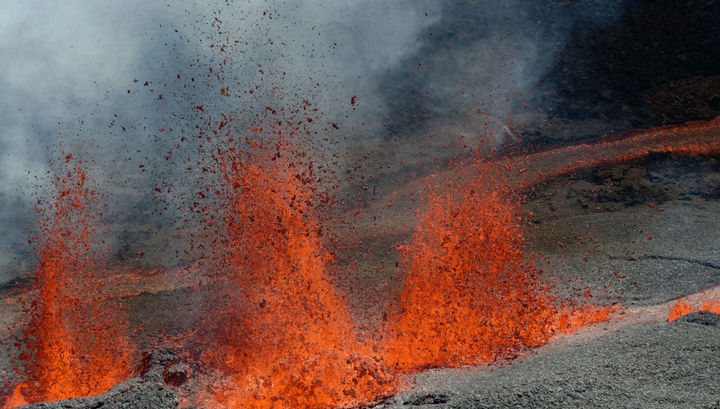 Four-kilometer Teide, located in the middle of the island of Tenerife – one of the largest active volcanoes on Earth. However, he has much to boast of and in addition to size and picturesqueness. Thanks to Teide, the research team led by James Hunt of the National Oceanographic Center of Great Britain opened a new mechanism for volcanic activity.

For hundreds of thousands of years, the “fire-breathing mountain” periodically experienced major eruptions. Traces of huge underwater landslides that accompanied these events and studied volcanologists.

It would be natural to assume that landslides were due to an eruption. But the researchers drew attention to the fact that rocks ejected from the crater in the molten state are present only in the uppermost layers of deposits formed by a landslide. This means that the landslide began before the eruption, not after!

By carefully measuring the thickness of the layers, the scientists calculated the time interval between the landslide and the subsequent “fire show”. It turned out that it is from 10 hours to a month.

But such a close coincidence in time of two major events, a landslide and an eruption, can hardly be accidental. And if the ground movement begins before the eruption, then maybe it is the cause of the volcanic explosion?

The authors suggest that it is so. As the press release of the study specifies, the substance in the main magma chamber of Teide volcano contains too little water to immediately pour out in a catastrophic eruption. After all, the substance from the volcano is pushed out precisely by the pressure of expanding gases, among which the main place is occupied by water vapor.

However, the landslide removes a huge amount of soil and releases the path of the magma from the lower chamber, rich in water. Magma from it rises into the main chamber and mixes with its contents. The powerful pressure of water vapor leads to a catastrophic explosion, at a power comparable to that of an atomic one, and the formation of a caldera.

“It is extremely important that this new study shows that after the initial underwater landslide, it can take from ten hours to several weeks until an eruption finally occurs … This information can help in developing mitigation strategies for volcanoes like Teide such as St. Helens or Montserrat, “says Dr. Hunt.

In other words, the study not only reveals new details of the life of “fire-breathing mountains”. Perhaps it will save more lives. After all, ten hours, and even more a few weeks – quite an adequate time to evacuate a small city.