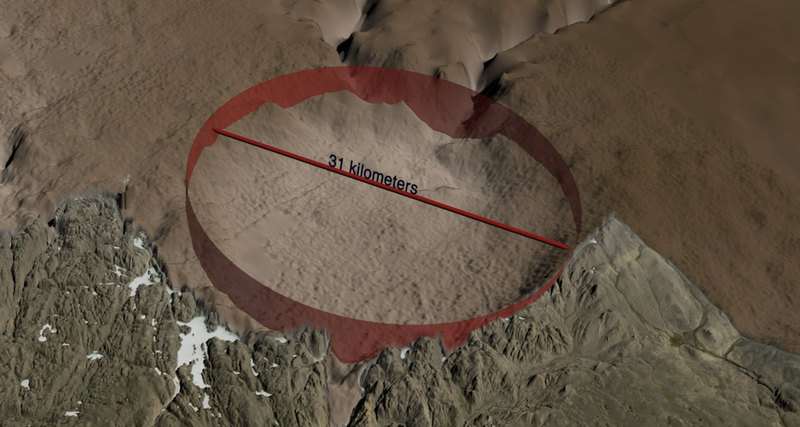 In the north-west of the largest island of the Earth is the Hiawata Glacier, which is part of the Greenland Ice Sheet. And under the kilometer-wide stratum of this glacier lies a large impact crater formed when a kilometer-sized asteroid falls to the ground.

This is reported by the article of an international team of scientists, published in Science Advanced. The discovery of the crater was the result of an analysis of data obtained during a series of radar aerial surveys of the terrain from 1997 to 2016.

The almost circular crater has a diameter of 31 km and a depth of about 320 meters. On top of it lies a layer of ice about 930 meters thick.

Scientists who discovered a new relief detail undertook an expedition to Greenland to collect and study rock samples. Of course, they failed to reach the bottom of the crater, and the samples collected on ice-free surrounding areas contain a fair amount of microscopic grains of quartz, plagioclase, ilmenite and other minerals that were once subjected to powerful short-term heating.

According to the calculations of scientists, such a crater could have been formed as a result of the fall of an asteroid with a diameter of about one and a half kilometers to the Earth, flying at a speed of 20 km / s and having a density of 8 t / m3. When it hit the Earth, 3 * 1021 J of energy had to stand out, and the initial crater depth probably reached 7 kilometers, but it quickly (in about a minute) collapsed to almost its present size. However, this is a very approximate calculation: almost all of the source data is not really known to us.

The age of the crater is still unknown. It can be said for sure that since it was formed in Paleoproterozoic rocks, this happened at least 1.5–2.5 billion years ago. Judging by its form and the degree of destruction of the walls, the matter was at a much closer time to us – no more than 50 million years ago, but rather – much less. If the fall of the asteroid occurred after the glaciation of Greenland (about 2.5 million years ago), then it would have remained clearly visible traces in the ancient ice – this event lifted into the air a lot of substance, which then settled down. But such traces have not yet come across to scientists.