Largest images ever created by man found in India

Hidden in the vast arid expanse of India’s Thar Desert are mysterious ancient drawings carved into the ground. According to researchers, these newly discovered drawings are so huge that they can only be fully seen from above.

The huge patterns are examples of geoglyphs – giant man-made images and figures created on or carved into the ground, often occupying such a scale that the true appearance of their forms can only be appreciated from above.

Among all known geoglyphs of historical significance, including the famous Nazca lines in Peru, images of the Tar Desert stand apart, representing perhaps the largest graphic images created by man.

An aerial view of the giant spiral (Boja 1) and Boja 2, including the snake figure in the lower right corner.

“By far the largest geoglyphs discovered worldwide and for the first time on the Indian subcontinent, these geoglyphs are also unique in terms of their cryptic signs,” the researchers explain in a new article detailing the find.

The new geoglyphs were discovered by a pair of independent researchers from France, Carlo and Johan Etheimer, using Google Earth during a virtual exploration of the Thar Desert (also known as the Great Indian Desert); the region covers about 200,000 square kilometers of India and Pakistan. 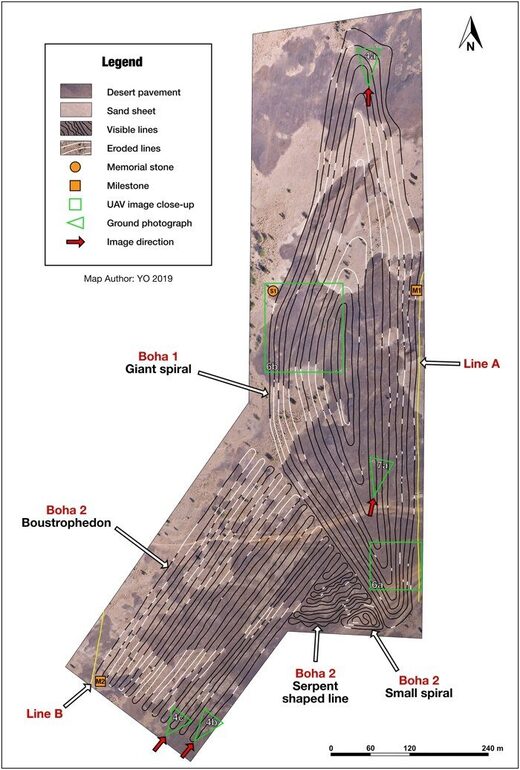 Among this vast desert landscape, the Etheimers discovered several sites around the “golden city” of Jaisalmer marked by geometric lines resembling geoglyphs.

In particular, two “remarkable geometric figures” of exceptional character stood out near the village of Bocha: a giant spiral and a serpentine pattern, each connected by a cluster of winding lines.

The lines forming these figures are strips dug into the ground up to 10 centimeters deep and 20 to 50 centimeters wide.

A section of the giant spiral, visible at ground level.

To the southwest of this huge spiral is a serpentine geoglyph (Bocha 2), consisting of an 11-kilometer line that includes a snake-like figure, a smaller spiral, and a long sequence of lines going forward and backward.

Other smaller geoglyphs (including the winding lines called Boch 3) can be found in the Boch area, totaling about 48 kilometers of lines still visible today, which researchers estimate may once have stretched for about 80 kilometers.

“The giant spiral and serpentine figure are certainly major landmarks closely related to Boha 3, suggesting that all other geoglyphs were created as the basis for this complex,” the researchers write.

“Because of their spatial contiguity, patterns 1, 2, and 3 can be perceived as a coherent design.”

Why these drawings were created and who created them is not yet entirely clear. Not knowing definitively about the identity of their creators, it is difficult to speculate about the function and meaning of these giant geoglyphs.

“Their gigantic size and the fact that you can only see them from a height of about 300 meters leads us to believe that the religious, astronomical or cosmological purpose of these geoglyphs,” the researchers say.