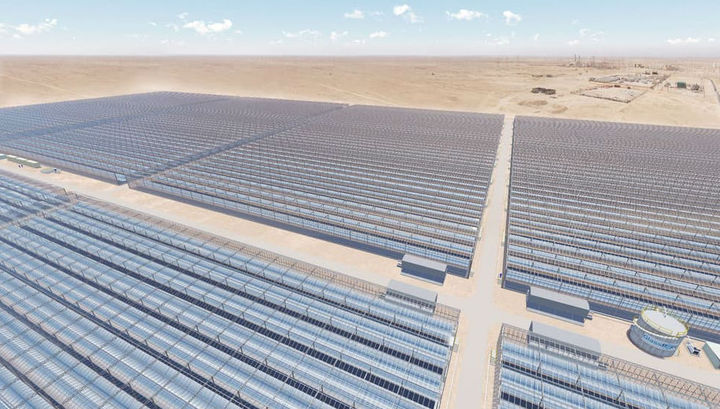 One of the largest solar power plants in the world, which is currently being constructed in Oman and will be used a bit for other purpose than it seems at first glance. This station will be to boil water for use in oil production and not for electricity generation.

“Steam room”, named Miraah, developed by Glasspoint company for an oil company Petroleum Development Oman. It is noted that the world’s largest solar power plant will produce the equivalent of one gigawatt of power and can replace a less energy efficient method using natural gas, which is currently the practice.

Miraah the complex will consist of a concentric array of curved mirrors, which will focus light on a boiler tube containing water. Typically, these solar power plants use heat to produce steam, which drives turbines, generating electricity.

But the steam created by the plant Miraah will be used in the nearby oil fields in order to ease the “heavy” oil so that it is easy to pump to the surface.

A large part of the easily extracted oil already extracted from the earth, therefore, different oil companies looking for new methods of extraction of heavy oil, which now makes up the majority of the remaining world reserves.

One of the most promising and effective methods is the injection into the reservoir of steam, which heats the oil and tmkk way reduces its viscosity, making the process of pumping to the surface simpler. Currently, for the production of steam requires large amounts of natural gas. As a result, companies spend a lot of funds for the purchase of raw materials. Parallel to the increasing demand for this energy source, prices are rising, a vicious circle.

The biggest advantage of solar power Miraah that she will be able to replace the less efficient method using natural gas. The station is expected to save 5.6 trillion British thermal units of natural gas annually, or roughly the amount of gas that is needed to provide electricity to more than 209 thousand residents of Oman.

Representatives of the company Glasspoint note that the Miraah project will generate on average six thousand tons of “solar” steam daily. Plans to reduce gas consumption in the oil fields up to 80 percent.

After completion of all construction works the project will include 36 modular self-cleaning glass surrounding the mirrors to protect them from dust and weather. It is expected that the construction of the station Miraah area of three square kilometers will be completed in 2017. The project is estimated to cost 600 million US dollars.