Life is found in the most dangerous region of the planet. 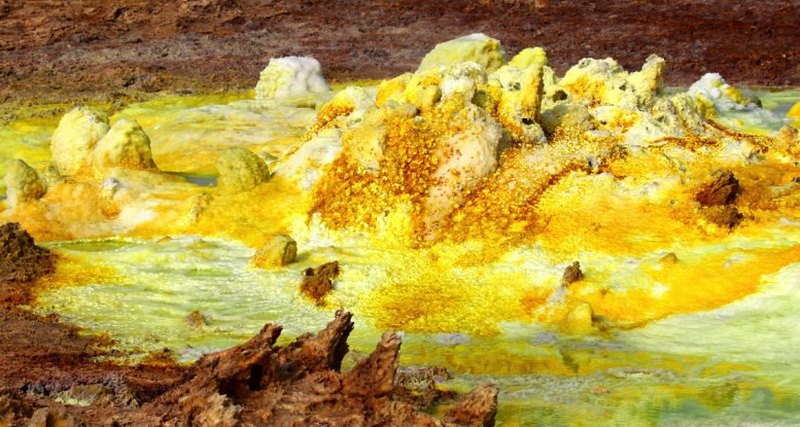 Trying to understand whether living organisms can adapt to the aggressive environment of Mars, scientists investigated one of the most poisonous and salty regions on Earth and found surprising evidence of their theory.

Let’s recognize: in comparison with Mars, our planet is a biological paradise soaked with moisture and, on the contrary, with a relative lack of toxic chemicals in the atmosphere. But if we want to find out what life could be on the Red Planet, then we must hunt for it in appropriate conditions. But is it possible to find those on Earth? Sure you may.

The Dallol geothermal zone in Ethiopia perfectly fits the definition of “local branch of Hell”. The researchers found that the minerals of one of the numerous hot sulfate sources of volcanic origin contain microinclusions of very small size. This discovery has once again expanded the boundaries of our understanding of what extreme environments a protein life can flourish.

An international team of researchers collected samples from the hydrothermal basin in the Danakil Depression – a desert area at a depth of 125 meters, which is considered to be one of the hottest places on our planet – and analyzed them for signs of life. The hollow itself is a very exciting place. When it was in its place the sea, but the divergence of the two tectonic plates warped the crust of the earth and turned the seabed into a salt plain.

In addition, tectonic activity led to the irregular heaping of volcanoes of mineral deposits and sources. In fact, this environment was formed quite recently, only by the beginning of the last century. High temperature, salt and insanely low pH levels usually have little relevance to the prosperity of living organisms, but … If humankind has learned something over the past decades, it is not worth underestimating life. There are many examples of microbes that can survive in insanely hot, salted areas with an overly acidic environment.

Studying fluid samples and crushed salt crystals, scientists stumbled upon the indigenous inhabitants of these lands. They were salt-resistant microbes the size of nanoparticles belonging to the archaean domain (lat. Nanohaloarchaea). Their dimensions range from 50 to 500 nanometers, which is very close to the extremely small size that living organisms can in principle reach.

Of course, in comparison with Mars, even a volcanic depression may seem like a real resort. The red planet is much drier than any region of the Earth, and water there exists only in the form of ice deposits a few meters below the surface of the planet. In addition, the soil itself is saturated with perchlorates and persulfates – toxic compounds that adversely affect virtually any organism. But, nevertheless, scientists are more than ever full of enthusiasm. Once life was able to adapt even to such harsh conditions, it is not impossible that it will find a way to multiply in an environment that is radically different from our planet.