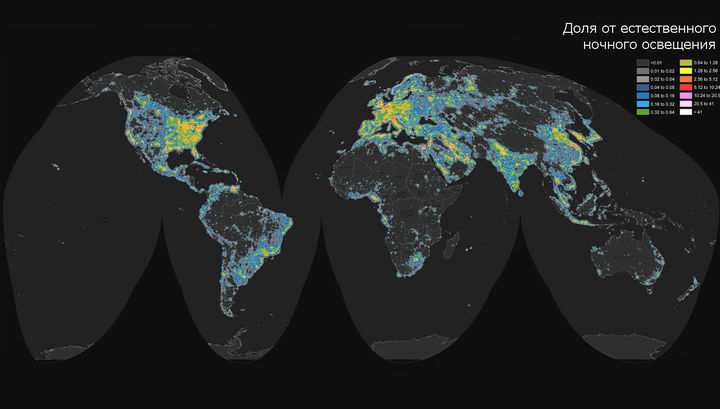 The glow of the milky Way for centuries, has inspired people to create paintings, writing stories, songs and poems. Now, however, a radiant source of inspiration may forever disappear from people’s lives.

Currently one third of people living on the planet, is the night to see the glow of our galaxy due to the artificial lighting that “struck” 80 percent of the globe. According to scientists, without proper regulatory action the problem of light pollution can only get worse. Their findings are part of a project to create an Atlas of world light pollution.

Explain what light pollution is the lighting of the night sky by artificial light sources whose light is dispersed in the lower atmosphere. Because of this at night in cities is never really dark.

“This Atlas is a useful tool to open people’s eyes. We have the nightmare scenario – to live in permanent twilight and never look at the stars,” says Travis Longcor (Travis Longcore), a researcher from the University of southern California in Los Angeles.

Light pollution has intensified over the past half-century, increasing about six percent annually in North America and Europe. New Atlas shows that currently more than 80 percent of mankind, watching over his head, “sotoserrano” the night sky, and more than 99 percent of the population of the US and Europe live under the lit sky.

If to count the population, the most light polluted the sky is Singapore, followed by Kuwait, Qatar and the United Arab Emirates – all of these countries are densely populated.

African countries have the “dull” sky, that is, they are the least influenced by light pollution. Everything is logical: the more developed a country is, the more spending on coverage you can afford.

Note that such pollution not only prevents the observation of the beautiful milky Way, but his study of astronomers (particularly in Russia). Strong artificial lighting is harmful to birds (unlike man they can’t close the Windows with thick curtains), deters nocturnal pollinators and bats, accustomed to hunt in the dark, disrupts the lives of all urban ecosystems, among other things, attracting swarms of insects.

Moreover, scientists say that such pollution may reduce melatonin production in the human body, which leads to sleep disturbances and increase the risk of colds and even some types of cancer. Yes, that really there, even the trees and those sleep at night.

And all these negative effects can take place even after the lighting was reduced or completely removed, experts added.

“Light pollution, is commonly viewed as a problem that can be solved very simply – turn off the light. Of course, we can reduce light pollution by turning off the light, but we cannot reverse the damage we have caused,” the scientist said Fabio FAL’kiv (Fabio Falchi) of a Scientific-technological Institute of light pollution in the United States, one of the authors of the study.

The FAL’kiv and his colleagues created the first world Atlas of light pollution by studying data from satellites of the U.S. air force in 2001.

Such a large interval between first and second atlases is partly due to the main amusement of the Italian scientists. But such a large interval was at the same time, useful because it allowed researchers to employ data Visible Infrared Imaging Radiometer Suite — 22-band radiometer operating in the UV, IR and visible range. This device was launched into space in 2011 alone.

Thanks to the new opportunities the team with 36 computers and 30,000 measurements of sky brightness by civil researchers created a model of light pollution around the world. Then more than 300 regional maps were combined into one in order to form a single global map.

According to scientists, the world Atlas of light pollution is the first step to understanding the impact of light pollution on wildlife. This Atlas will raise the individual’s awareness of the problem and underestimated the danger of “constant twilight” for the inhabitants of the planet.