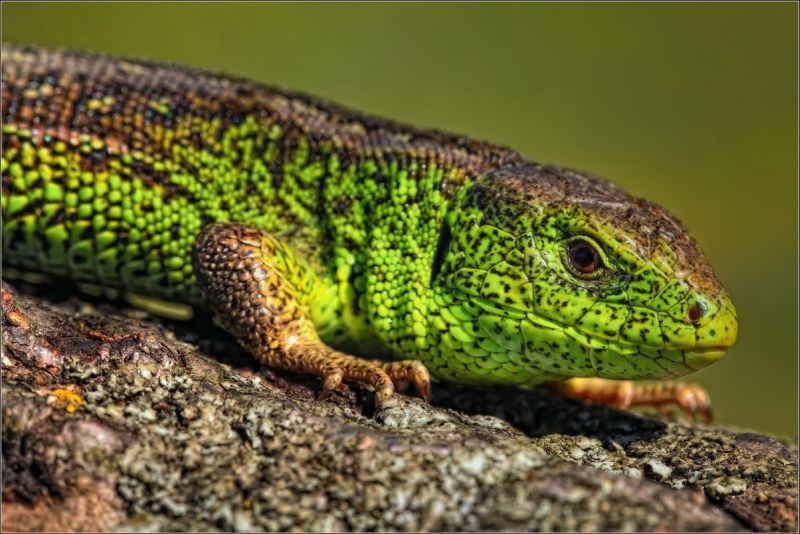 Young specimens of southwestern European lizards have a color of three colors in the form of rings, and these rings are located across the scales. Like most reptiles, color has nothing to do with scale structure. But when the lizard grows up, the scales are completely painted in one of two colors – green or black – and form a tortuous pattern, similar to a labyrinth. In this case, the flakes periodically change their color.

Observing adult lizards, a few years ago, the head of the laboratory of artificial and living evolution of the University of Geneva, Professor Michel Milinkovich noted that the behavior of the skin of reptiles is similar to the evolution of the cellular automaton. A cellular automaton is a computer system proposed by one of the fathers of modern computers, mathematician John von Neumann. The system consists of a set of rules by which cells are repainted depending on the color of the neighbors. Even simple rules can lead to very complex behavior, orderly or chaotic. An example is the “game of life” on checkered paper, often mentioned in popular literature, for example in the books of Martin Gardner.

Michel Milinkovich and his colleagues observed lizards for four years, the color of which varies with age. It turned out that the skin of lizards really looks like a cellular automaton – cells are repainted depending on how many neighbors they have of one or the other color. The result of the study is published in the journal Nature, in the article A Living Mesoscopic Cellular Automaton Made of Skin Scales.

However, the most common reason for the appearance of patterns on the skin of animals has nothing to do with cellular automata. It was suggested by the famous mathematician Alan Turing in one of his last articles. This interaction of pigments, described by the reaction-diffusion equations.

If the pigment simply diffuses, then, for example, the black spot spreads, and all the skin becomes gray. But if there are non-trivial reactions between different diffusion pigments, the behavior of solutions becomes more difficult. Turing noted that with very simple coefficients the solutions can behave differently – there are either spots, or bands, or spirals. Sometimes patterns move or pulsate. The comprehension of the Turing hypotheses took half a century, and now it became obvious that the coloring of many animals comes precisely from its equations. An exemplary example is the zebra fish that live in tropical seas, the complex patterns of which follow from fairly simple equations.

The question with which Michel Milinkovich addressed Stanislav Smirnov was: How can a cellular automaton be derived from an equation of reaction-diffusion type? Together, scientists suggested that changing the thickness of the skin between the lizard scales should reduce the diffusion coefficients in these equations in the Turing equation.

“I was able not only to confirm our general assumption,” said Stanislav Smirnov, “but also to show how in this case the Turing equations reduce to a discrete form on the lattice of scales (where it is assumed that each flake is colored in one color), and then to Cellular automaton. Since instead of an entire region of points everything comes down to studying the colors of several thousand flakes, the task is greatly simplified. In turn, this new model has been linked to a cellular automaton. ”

The mathematical proof of this new observation is largely due to research in the field of chemistry and biology. It is interesting that the Turing equations were related to the von Neumann cellular automata, and this connection is manifested in nature as a result of Darwin’s evolution.

In this case, the mechanism of the appearance of patterns, described by scientists in Geneva and in St. Petersburg, is very different from those that were previously considered by their colleagues. According to Stanislav Smirnov, the results obtained during this research can be developed and applied in various fields of science, including in biology and physics in the study of spontaneously formed patterns.