Locusts were able to navigate by the sun 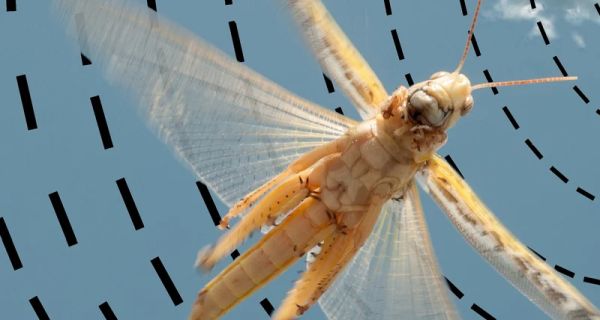 The Desert Locust, which lives in Africa, the Arabian Peninsula and Hindustan, is a migratory locust species that can form large flocks that fly long distances. Science already knows that the purpose of the migration of these insects is genetically laid, but how they orient themselves in space during the flight has still remained a mystery. However, German scientists from the universities of Marburg and Würzburg managed to find an answer to this question.

“Behavioral experiments have shown that locusts perceive the angle of inclination of polarized light and thus orient themselves in flight,” explains one of the study authors, professor of neuroscience in Marburg Uwe Homberg. When the sun’s rays pass through the atmosphere, a pattern of polarized light appears in the sky that is not visible to the human eye. However, the locust perceives it and uses it as a guide. To find out, scientists measured the activity of insect nerve cells, detecting their response to light displayed on a virtual model of the sky.

According to the study authors, the various patterns of polarized light that occur at a particular position of the sun are “encoded” in the central body of the locust brain. That is, in fact, insects have a neural representation of the sky, and in flight, the real picture is compared with this “internal compass”, which at the same time works at 360 degrees – locusts do not need to look directly at the sun to orient themselves.