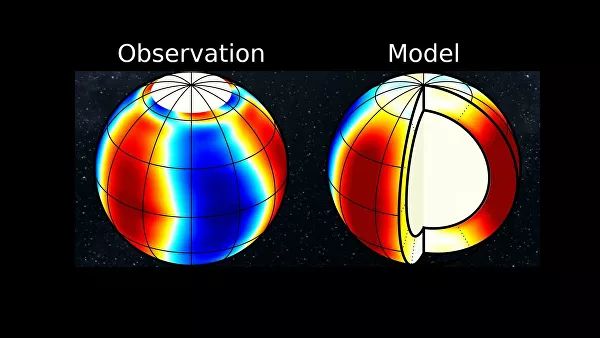 After analyzing the data of ten-year observations of the Solar Dynamics Observatory space observatory, scientists for the first time discovered long oscillations in the Sun with a period of 27 days, which appear on the surface of the star. The research results are published in the journal Astronomy & Astrophysics.

In the 1960s, solar physicists discovered millions of acoustic modes with short periods of about five minutes, which are excited by convective turbulence near the star’s surface. These five-minute oscillations are continuously observed by ground-based and space telescopes, and helioseismologists have successfully used them to study the internal structure and dynamics of our star – just like seismologists study the internal structure of the Earth.

Moreover, more than 40 years ago, scientists predicted that in addition to short oscillations in stars, there are much longer ones, but they have not yet been detected.

NASA’s Solar Dynamics Observatory (SDO) was launched in 2010. During this time, she transmitted more than one hundred million images to Earth. After analyzing them, scientists for the first time discovered long-period oscillations in the Sun, comparable to the 27-day period of the Sun’s rotation. Oscillations appear on the surface of the Sun in the form of vortices moving at a speed of about five kilometers per hour.

“Long-term oscillations depend on the rotation of the Sun, they are not acoustic in nature,” research director Laurent Gizon of the Max Planck Institute for Solar System Research and the University of Göttingen in Germany said in a press release. measuring horizontal movements on the sun’s surface for many years. Continuous helioseismic and magnetic observations aboard the SDO are ideal for this purpose. ”

Researchers have recorded dozens of vibration modes – each with its own period and spatial dependence. Some have maximum speed at the poles, others at mid-latitudes, and still others at the equator. The modes with the highest speed near the equator are Rossby modes that scientists have already identified in 2018.

Using computer models, the authors showed that the detected oscillations are resonant modes and owe their origin to the differential rotation of the Sun.

“Models allow you to look inside the sun and determine the full three-dimensional structure of the oscillations,” explains one of the authors of the article, graduate student Yuto Bekki at the Max Planck Institute for Solar System Research.

The researchers found that the oscillations are sensitive to the internal processes of the Sun, in particular, to the strength of turbulent motions and the associated viscosity of the solar medium, as well as to the strength of convective motions.

“The discovery of a new type of solar oscillation is exciting because it allows us to draw inferences about intrinsic properties, such as the strength of convective motion, that ultimately drive the solar dynamo,” says Laurent Guizon.