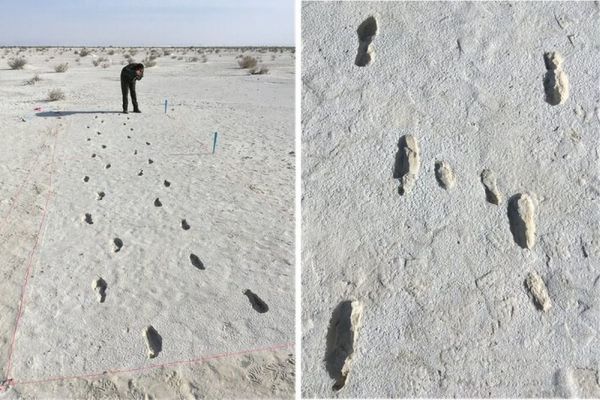 In the United States, at a prehistoric site in White Sands National Park in New Mexico, an international and interdepartmental team of scientists has discovered the longest chain of human footprints left about 10 thousand years ago on the shore of a now dry lake.

The research is detailed in the journal Quaternary Science Reviews and is briefly described by The Conversation. The discovery was made at the bottom of a dry lake known as Playa. Earlier, hundreds of thousands of human and animal footprints were found here, dating from the end of the last ice age (about 11,550 years ago). The oldest footprints are about 13 thousand years old.

Another find turned out to be simply amazing. Scientists managed to find a chain of footprints of prehistoric man, which is not only the longest of all known to science, but also the most direct. Its length exceeds 1.5 km. The study showed that prehistoric man practically did not deviate from the course.

Moreover, he returned back the same way and probably spent several hours on the road. The path was clearly not easy. The footprints told the scientists that in a certain place a person slipped, and in another he jumped over a puddle. All indications are that the ground was wet and slippery. Walking along it was extremely tiring.

Who left the longest chain of fossil footprints in history? And where was he in a hurry? The researchers note that the tracks are quite small. From this it can be assumed that they were abandoned by a woman or a teenager. It was a real mysterious journey.

The fact is that in several places, next to the traces of a mysterious person, children’s tracks appear and then disappear again. Scientists suggest that a woman (or a teenager?) Carried a child in her arms most of the way, but from time to time she lowered him to the ground to rest.

Judging by the size of the children’s footprints, they were left by a toddler about two years old or even a little younger. Another mystery: what was the fate of this child? Judging by the footprints, he was carried in his arms only in one direction, and the unknown prehistoric man returned alone.

In their study, scientists describe many other tracks found on the same site. Their analysis will help in studying the mechanism of interaction between humans and animals at that time. Probably, Lake Playa was home to so many creatures, among which were formidable predators.

Thus, the researchers found traces of mammoths, giant sloths, saber-toothed tigers, prehistoric wolves, bison and camels. By the way, in previous years evidence of people hunting for animals was found here. This time, even more surprising evidence was found that children played in the puddles formed in the tracks of giant sloths.

By the way, tracks of this animal were also found near the discovered chain of human tracks. Scientists believe that a giant sloth, having reached them, stood on its hind legs and sniffed. Probably, he sensed the danger emanating from the person and immediately left.