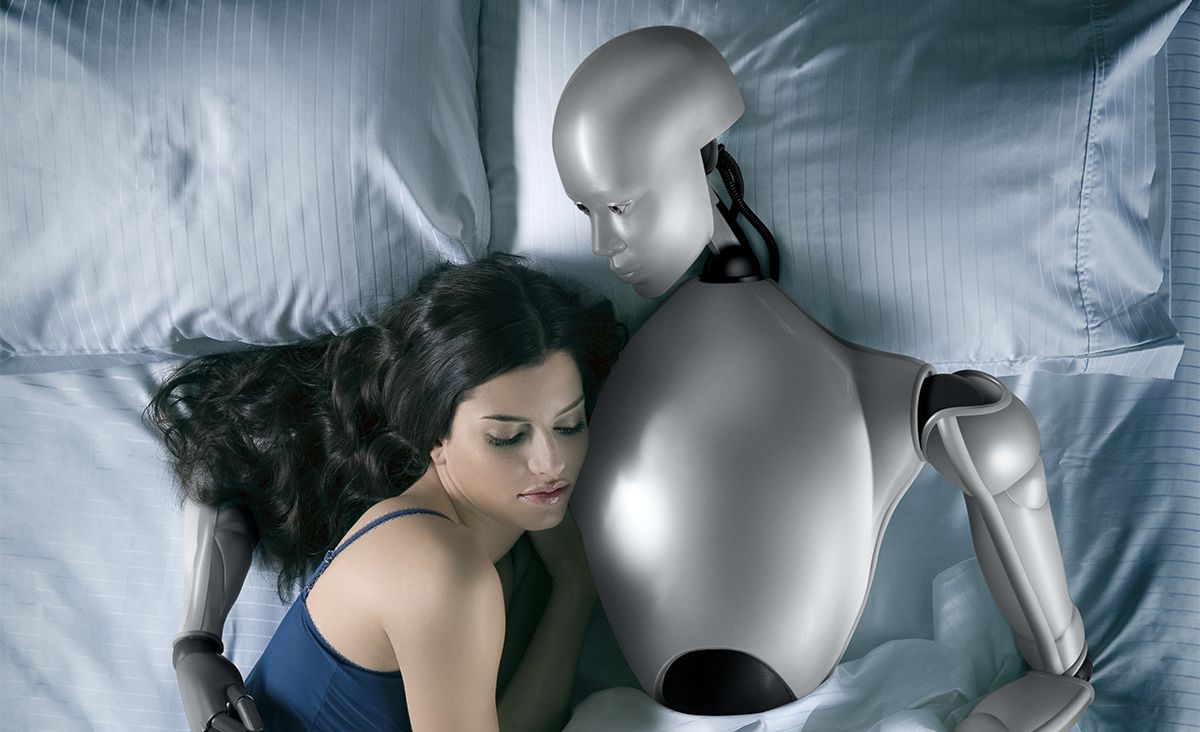 Seriously futurists predict that after some 40 years robots will replace real sexual partners. Women have androids and the breast is large, and the head does not hurt and is not tantrums. Man-the robot does not drink, does not smoke, on other androids do not ever look.

But not far off are the days when distance generally will not be a hindrance to full satisfaction. For example, recently, a well-known company Durex revealed to the world the prototype of sensitive undergarments. When submitting commands from the phone by anyone from uchastnikami linen vibrates in certain areas. Interaxon, the company intends to start production of a cheap (less than $ 200) Hoop head that reacts to the brain waves of media. And those who “tried” ultra-realistic stimulator Fleshlight, now say that sex for them is not a problem. Whether still will be!

It seems that artificial intelligence, realistic materials and flexible configuration is really going to make in the near future the business – robots will be able to meet all human needs, including sexual. Many futurists believe that they will be a good alternative to prostitutes. If You are bored with the appearance of Android Claudia Schiffer – it is possible to change it on angelina Jolie. The Japanese had already demonstrated a prototype of a mechanical silhouette, on which is superimposed an animated hologram of a girl. And for the filming of pornographic scenes in the movie “Nymphomaniac” by Lars von Trier used the technology to make the actors ‘ faces on the body doubles. If it goes on Hollywood would be unemployed. As well as representatives of the sex industry.

They say, however, that, at least in Western countries, the introduction in this sector, robots will go “night butterflies” in a more comfortable and safe working conditions. They will be able, without intermediaries, to manage their career using computer networks, online advertising and personalized marketing. One thing is unclear – is how such news will react pimps.

Inspired by the competitions simulate guitar Air Guitar, Japanese Jataro Shisaku in 2006 came up with competitions in simulation of the sexual act – Air Sex. The participants of these competitions have the most authentic and artistic to show off their sexual skills with an imaginary partner. The idea quickly picked up in Western countries, and has already held several Championships in different countries on “air sex”.

The robot can be taught emotional reactions and compassion. Computer programs such a plan already exist. And this time – in their native homeland. At the Institute for physical problems (IFP) of the Russian Academy of Sciences robots impart even a sense of humor. The staff of IFP has developed a program by which the computer began to understand the jokes and laugh at them. Joke he can himself. Nothing that a plane – progress is not in place. As experts say, computers of the near future is the so – called neural machine. They simulate processes in the human brain. Perhaps such a “funny” program will be able to reach the level of Mikhail Zadornov and Elena Sparrow. It is clear that the average man in the street with such a robot will be far more interesting than a desperate housewife in curlers or a mechanic-drunk.

The American company Medical Education Technologies (METI) has developed the humanoid robot. With the name did not bother, called simply – “the standard man” or Stan. This “standard” to speak, to imitate the breath and even the heartbeat! The robot is able to urinate and to him – Oh, gods! – attached two sets of genitals.

Indian scientists are predicting robots the role of the “helpers” of marital sex. Indeed, in family life disappears prelude, which is so important for proper excitation. Scientists believe that robots will play the role of stimulator or third, which is not superfluous. Silicone women have what is called, nervously Smoking.

Scientists have calculated the ideal duration of sex. According to the conducted research, the majority of men and women meets for ten minutes a sexual act contrary to the usual stories about the many hours of love games.

The Huffington Post conducted a survey, which was attended by one thousand adult U.S. citizens. It turned out that only 9% of respondents themselves would not mind to have sex with a robot. But, according to 18%, by 2030, the sex robots will become part of our everyday life.

Observer popular science portal fastcolabs.com Michael Grothaus these figures seem strange. “Keep in mind that a much larger number of people are using electronic and often very advanced sex toys. The idea is that much more intelligent and able to adapt to human devices, which, of course, are the robots-androids in our time, should cause at least no less enthusiasm,” says Michael. In spite of that, according to the same survey, there is an explanation. 42% of respondents simply believe that sex with a robot is a kind of fraud (31% – do not think so and 26 percent are not sure). “You mean sex with some “smart” vibrator or smartphone is not a Scam, and with the same device, but whose are the hands, face and eyes – a fraud,” concludes Grothaus.

In the same survey people were asked whether sex with a robot adultery? 42% answered this question positively, 31% said that it won’t be cheating. As the infidelity was assessed this situation most of the respondents over the age of 65 years. The younger generation of Americans has been more loyal in this matter.

But futurists center Transhumanity from still promise that after 40-50 years, sex with a robot will become the norm for humans. And this is understandable. The advantages of these partners, and partners are obvious: durability, hygiene, incredible experience and simplicity. The robot is still how you look, what you weigh, it does not matter your intellect and creativity – it is programmed to “love” you forever. At the same time he can look like Brad pitt or Jennifer Lopez. And the next day, if you want to be Joni Depom or Marilyn Monroe. You should only want.

Roboty, according to scientists, will be able to skillfully perform oral stimulation, massage the G-spot and prostate, they will have 2000 variations of rhythm copulation with scented lubricants. Another advantage of sex with machines: safety, no restrictions and uncertainty. Society will get rid of STDs (sexually transmitted diseases) because the sex-bots will be made of a fabric resistant to bacteria, which will get rid of human excreta after use.

One of the UK’s leading websites specializing in the sale of used cars, has conducted an original survey among its users to find out how many motorists were having sex in the car, and what cars, in their opinion, better suited for this. First place went to the Mercedes-Benz E-Class, the second to Volkswagen Beetle, the third – Ferrari 458 Italia.

My husband is a robot!

Sounds scary. However, the Dutch researcher David levy, a member of the genome research and artificial intelligence, the author of the book “Sex with robots: the evolution of relations between robot and person” believes that over the next forty years, robots will become so human like in appearance and personality that many people will fall in love with them and even marry. “At first, sex with robots may seem like a perversion, but as soon as something like Cosmopolitan magazine will publish an article entitled “I had sex with a robot and it was great”, many people will go for it,” believes levy. Alas, it seems that in his words is truth.

He admits that the first marriages between robots and humans are likely to be illegal. But after some time – “endure-slyubitsya”. Resigned, the residents of Massachusetts with the legalization of gay marriage, and get used to it…

There is nothing worse than to be like everyone else!

– Some people are afraid of the rapid progression of technology that is becoming more active and even aggressive introduced into the Holy of holies of our civilization – the human being – says the famous St. Petersburg psychotherapist-psychoanalyst Dmitry Olshansky. – Today the development of genetic engineering, Transplantology and prosthetics raises the question of esse homo: how the human in us remains? In the modern world back the seemingly forgotten question of the soul and the dialectics of material and spiritual substances. For example, if most of the organs of the body will be artificial, external memory, options installed, and the competence and the functioning of the organism will be supported by mechanical devices, could such a being be called human? Or where comes the line from which Homo sapiens becomes Homo cyberneticus, and the person becomes an Android or a hominid of another species? Yes, and how to support the process of reproduction of such beings? Maybe the separation of the sexes they do not need, and sex will remain as a throwback, just for fun?

Objections to this concern can be several. First, is today the sex seemed to be people not of a nature devoid of the senses of the gym? Whether it is one of the sports that I do to maintain in shape, for fun, no matter with whom and where you do it? The more the doctors suggest to brush your teeth twice a day, and to mate twice per week. Nothing personal, just maintaining the hygiene of the body. The fact that the destruction of the senses and “marinovaniya” sex robots don’t need, people handled it pretty well. In General, impersonal sex, losing their identity, dissolving in the other, “animal sex” or any other totem of the Association, are all important elements of the phantasm neurotics, they need to maintain their sexuality. However, as fantasies of insensitive bio-robots, machines for sex, which is also working to maintain their potency.

Secondly, why do these people think that cybernetic machine obviously devoid of eroticism? Isn’t that sensuality is a kind of mechanism working according to certain rules and laws? A very clear system with its codes and signs. For example, those signifiers (the term “meaning” in the psychoanalysis of Jacques Lacan at the household level, it is possible to decrypt so: it’s something that means something to someone – approx. ed.) that excite one, the other can be read as disgusting or neutral. Or something erotic in a certain context, specific optics and at this time, under other circumstances, would be meaningless. Not whether we are dealing with a well-designed sign system, which is erotica?