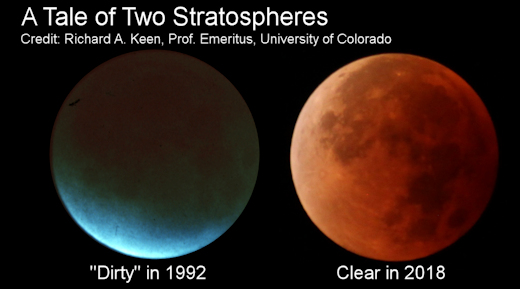 Surprisingly, it’s a fact: you can learn a lot about the Earth’s climate by observing a lunar eclipse. Climatologist Richard Keane of the University of Colorado announced his observations of lunar eclipses for several decades. According to him, based on the color and brightness of recent eclipses, we can say that the stratosphere of the earth is fairly clean – it has very few volcanic aerosols. This is an important point, since such a stratosphere better passes the sun’s rays warming the earth below.

To illustrate the effect that volcanic aerosols have on eclipses, Keane compared the lunar eclipse observed in 1992 after the Filipino volcano Pinatubo threw out millions of tons of gas and ash into the atmosphere, with an eclipse in January 2018. The net stratosphere since 1995 has contributed to the fact that the intensity of solar radiation increased by 0.6 W per square meter, which is equivalent to heating by 0.1-0.2 degrees.

In other words, over the past 40 years, the reduction in the level of aerosol particles and the increase in greenhouse gas emissions have equally contributed to the overall warming.

Complete lunar eclipses occur, as a rule, once or twice a year. Kin eagerly awaits the next eclipse on July 27, 2018, which will be the longest lunar eclipse of the century. The moon will pass almost through the center of the earth’s shadow, staying in it for 1 hour and 43 minutes. This will also give scientists enough time to follow the color and brightness of the Earth’s shadow and, thus, to reveal the level of aerosol content in the stratosphere.