Lunar foggy rainbow against the background of the polar lights 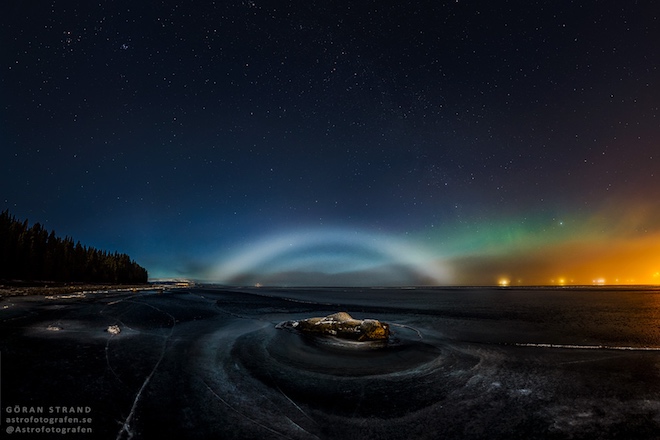 What will turn out if to unite moonlight, fog and solar wind near a polar circle? The answer to this curious question the Swedish photographer Goran Strend the other day has visually shown Östersund. He managed to make a rare photo of a lunar foggy rainbow in combination with the bright polar lights.

The colourful atmospheric phenomenon has got to a camera lens on December 17 when Goran Strend Östersund worked at the coast of the Swedish lake Sturshyon. The fog which has covered the lake, having refracted and having disseminated moonlight beams, has formed a white arch, similar to a rainbow.

According to the photographer, he dreamed to imprint a foggy rainbow for a long time. At the same time with own eyes this unusual natural occurrence Goran Strend saw Östersund for the first time, and the show it “was much more beautiful”, than he expected.

“I shook hands from admiration, and again has realized as many these most beautiful natural phenomena actually mean to me” — he has told on the SpaceWeather portal.

It is possible to call a foggy rainbow the close relative of the usual rainbow which is formed during a rain. The principle of their formation is in essence identical: light refracts and dissipates water drops, forming the shining arch.
As for a greenish background on the photo made the Strand, this shine was provided by a small stream of solar wind which has reached magnetic field of Earth in the past weekend.