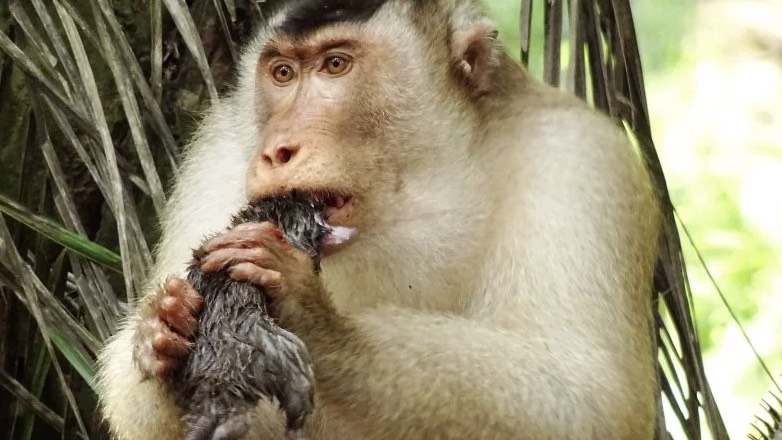 Scientists have discovered that in Malaysia, voracious macaques catch and eat large rats. Shocked researchers found macaques-Pied Piper in oil palm plantations. According to them, hungry predators can be used to control pests, reports The Sun.

Up to this point, scientists were convinced that pig-tailed macaques preferred to eat fruit. Sometimes they hunted other animals, but mostly they were only small lizards or birds. Now zoologists are convinced that they regularly catch and devour large rats.

“I was stunned when I first saw macaques eating rats on plantations,” said Nadine Ruppert of the University of Saints of Malaysia. “I did not expect them to prey on these relatively large rodents and can eat so much meat,” she added.

Scientists conducted a new study from January 2016 to September 2018 on plantations around the Segari Melintang Forest Reserve. A group of macaques usually numbered about 44 monkeys and killed an average of 3,000 rats per year — nearly 70 rats per monkey per year or one rat every five days.

Macaques hunted rats, hiding in the trees, which caused rodents to become easy prey. According to experts, every year about 10% of the oil palm crop dies due to rats.

Thus, now instead of processing the crop with harmful pesticides, you can “ask” the monkeys to help in the fight against pests, scientists are sure. “We hope that our study will encourage owners of private and public plantations to consider protecting these primates and their natural forest habitats in the area of ​​existing and newly created oil palm plantations,” biologists said.