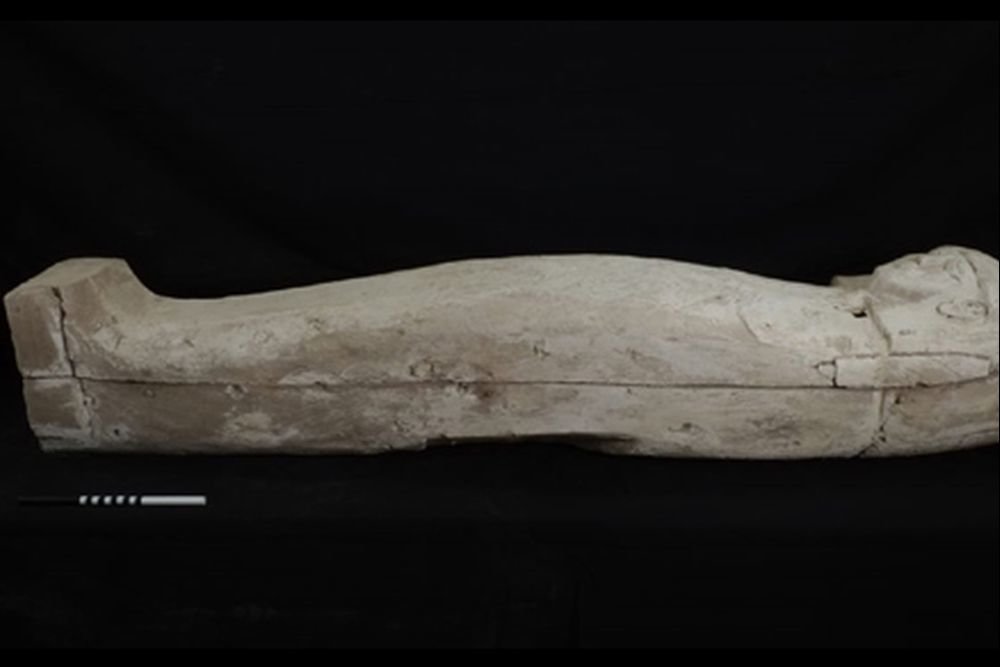 The archaeological mission of the Ministry of Antiquities of Egypt, while conducting research in the necropolis of Draa Abul Naga in the city of Luxor, discovered an anthropoid sarcophagus containing a mummy of a teenage girl.

Ahram Online talks about the discovery. The anthropoid sarcophagus of the XVII dynasty (one of the dynasties of the pharaohs who ruled in Ancient Egypt during the Second Transition in the XVII-XVI centuries BC) was discovered during excavations in an ancient clay chapel.

The study involved Spanish archaeologists. They and their Egyptian colleagues stumbled upon a sarcophagus, literally scooping up heaps of funeral debris. The work was carried out on the site located in front of the courtyard of the tomb of Jehuti – the military commander of the pharaoh of the XVIII dynasty of Thutmose III.

Researchers note that the sarcophagus was neatly laid on the ground. Its length is 1.75 meters. It was carved from one trunk of a plane tree, after which it was covered with whitewash and painted red.

Inside this coffin was found the mummy of a teenage girl, who at the time of death was 15 or 16 years old. Unfortunately, the mummy is very poorly preserved. The ears of the buried girl were decorated with two earrings made in the shape of a spiral. Perhaps they were copper.

Also, two rings were found in the sarcophagus, one of which was bone, and the other metal. The latter is decorated with a kind of blue glass ball. Four necklaces were also found on the chest.

Scientists consider the third necklace to be the most beautiful, the length of which is 61 cm. It is made of 74 beads made of various materials: amethyst, carnelian, amber, blue glass and quartz. In addition, this necklace was adorned with two sacred scarabs and five faience amulets.

The fourth necklace consists of several strands of earthenware beads. It is equipped with special rings at the edges, with the help of which all the threads were knitted together.

On the opposite side of the chapel was found another small coffin made of clay. Inside it, archaeologists found a funerary wooden figurine of ushabti, wrapped in four linen bandages.

On one of these dressings is written “Osiris, Jehuti.” This indicates that the burial found may have been part of the general burial of the military commander mentioned above.

By the way, next to the sarcophagi, researchers found a pair of well-preserved 3,600-year-old leather sandals. They are painted in bright red color and decorated with images of deities and cats. Judging by these jewelry and size, the sandals were feminine.