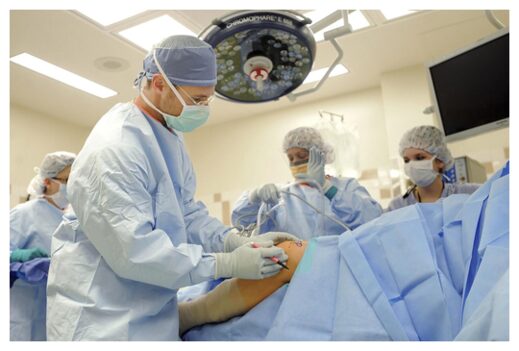 When you take a pharmaceutical drug, you expect it to have undergone rigorous testing to ensure that it’s safe and effective. You probably have the same expectations for when you’re going under the knife. But surgeries aren’t actually required to face that same level of scrutiny. As Dr. Chuck Dinerstein, Medical Director at the American Council on Science and Health, explained:

“A new therapy involving a medication requires the approval of the FDA, and that requires evidence that the new drug is at least “non-inferior” to what is already available. Not so for a new surgical technique or device. For my surgical brethren, all we need is a good idea and our “can do” attitude takes over, and we try out a new technique, instrument or operation. Once the novel surgical “treatment” is being used, then we can do those studies, “non-inferior” may be more our opinion than a statistical finding.”

So, in a sense, surgeries can be trusted as much as surgeons’ and anatomists’ expertise can be trusted. For the overwhelming majority of surgical procedures, this works out just fine, but for some, it does not.

The greatest offender may be arthroscopic knee surgery. Performed some 700,000 times per year in the United States, it is the most popular orthopedic surgery. During the procedure, a surgeon makes a small incision over the knee joint, then might remove inflamed tissue, repair a meniscus, or remove bone fragments or cartilage, among other potential actions. Unfortunately, two years post-operation, patients experience little to no benefit in terms of pain or knee function compared to patients who managed their knee pain more conservatively through actions like weight loss, exercise, and the use of over-the-counter pain medications.

Even more damning for the popular procedure, when doctors peformed a study testing knee arthroscopy against a placebo “sham” surgery, where some patients unknowingly only received a small incision, there were no advantages for patients who received the genuine procedure.

An identical fate has befallen other popular surgeries. Hundreds of thousands of shoulder operations performed every year in the United States lack significant evidential support. Subacromial decompression, intended to relieve shoulder impingement, was found to be no better than placebo surgery. Acromioplasty, meant to repair damaged rotator cuffs, is likely no better than targeted exercise when it comes to relieving pain.

Moving down to the body’s midsection, a popular spinal surgery called vertebroplasty was found to be comparable to sham surgery back in 2009. During the procedure, medical cement is inserted into the spine to strengthen it, with the hopes of alleviating back pain. More than a decade later, vertebroplasty is still performed tens of thousands of times each year despite its apparent ineffectiveness.

Being operated upon is expensive, time-consuming, and carries risks, so it’s vital that procedures actually help patients. Unfortunately, surgeries are rarely tested in controlled settings against a placebo. Many doctors insist that this is for ethical reasons – why cut into somebody if you’re not actually going to do anything? But as science reporter Trace Dominguez pointed out, “If a surgery was widespread but later proved ineffective, then didn’t performing all those operations expose more people to risk than if a small trial had the placebo option?”

While one could not ethically pit a life-saving surgical procedure against a placebo, there are plenty of elective surgeries, particularly those intended to treat pain, that absolutely merit scientific scrutiny. The current status quo is wasting hundreds of millions of dollars a year cutting into patients unnecessarily.