Biologists have confirmed that Mississippi alligators (Alligator mississippiensis) have an amazing ability: they grow lost tails. Learning this “skill” can be a step towards the restoration of human organs and tissues.

The achievement is described in a scientific article published in the journal Scientific Reports.

Stories of alligators recovering their lost tail have been around for a long time. But until now this phenomenon has not been studied in detail by biologists.

Now, three individuals have fallen into the hands of scientists, growing the lost tails. They were caught in the wild already in this form. When and how the animals lost this organ, it was not possible to establish.

Biologists killed the reptiles and carefully studied the anatomy of the regrown tail. For comparison, they used the “pristine” tail of another alligator.

It turned out that the reconstructed tails reach substantial sizes: up to 18% of the body length (by the way, the latter can exceed four meters). The animals have successfully regenerated scales, nerves and blood vessels.

At the same time, the new organ is not an exact anatomical copy of the lost one. So, instead of a spine, it contains a cartilaginous tube not divided into vertebrae. Skeletal muscles in the regrown tail are absent, and connective tissue takes their place. (Note that such tissue forms scars and scars at the site of injuries in mammals. But in lizards, the muscles in the regrown tail are restored). The dorsal shields are also absent, and the scales on the skin are denser than usual. 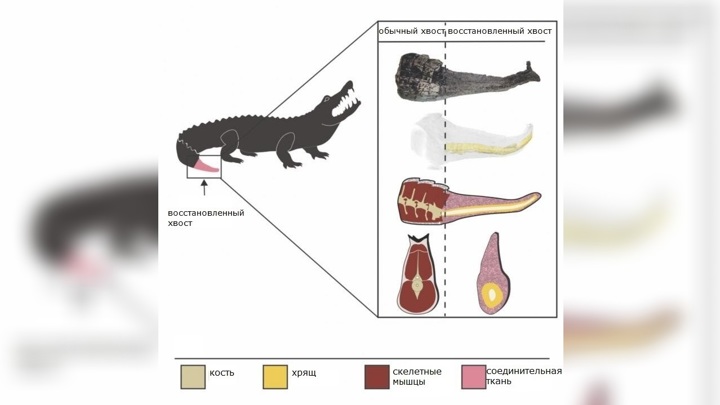 Anatomical differences in the structure of the normal and regenerated alligator tail. Translated by Vesti.Ru.
Illustration by Arizona State University.

However, the very fact that alligators regenerate such a complex organ is amazing. True, lizards have such a “superpower”. But alligators and other crocodiles belong to a very different group of reptiles: the archosaurs. This advanced group also includes dinosaurs and their offspring that have “outgrown” the reptile-bird class.

The evolutionary lines of alligators and other archosaurs diverged later than alligators and lizards (nonarchosaurs). Does this mean that the common ancestor of all archosaurs also knew how to restore the tail? Did dinosaurs have this ability? When did birds that do not have a tail in the traditional sense lose this “skill”? All these questions have not yet been answered.

Scientists plan to continue a detailed study of the unexpected “superpowers” of formidable reptiles. Perhaps this will help pave new paths in medicine. After all, a person also would not give up the ability to restore lost organs.