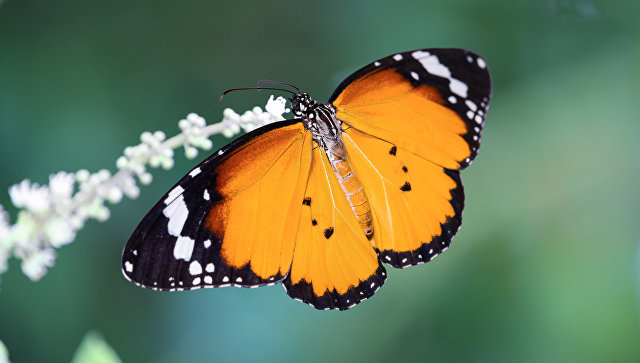 Biologists from Britain and Kenya have discovered a very unusual microbe is a parasite, which “zombifies” infect butterflies and makes them deadly to males that die inside the eggs, or eaten by their sisters.

“We used to think that new species of animals and insects appear as a result of changes in the environment, however, in this case this process is clearly conducted by a microbe causing two subspecies of butterfly to split up further and further,” says Richard Ffrench-Constant (Richard French-Constant from the University of Exeter (UK).

Ffrench-Constant and his colleagues have uncovered a very surprising relationship between the butterfly species Danaus chrysippus, which fans of the insect is often called the “African monarchs” by analogy with their American relatives Danaus plexippus and microbes of the species Spiroplasma ixodeti.

These microbes, as the researchers note, was considered ordinary by parasites of insects that have been passed down from mother to her offspring without causing serious changes in the lives of butterflies and other arthropods, which they were infected. Watching the life of “African monarchs” in one of the corners of Kenya, the authors realized that in fact, these germs are much more dangerous than previously thought.

It turned out that among Kenyan Danaus chrysippus, there are two subgroups, one of which is very strange reacts to the infection with spiroplasma. Scientists have discovered that these microbes don’t affect the behavior of the adult insects themselves, and their posterity – they change the operation of the genome of butterflies and modify their behavior so that all new females turn into “femme Fatales”.

It is shown that the probability of birth of males from eggs laid by infected Danaus chrysippus becomes close to zero, and if they emerge, they eat their own sisters, “zombie” Spiroplasma ixodeti penetrated into their bodies before birth in the womb.

Why microbe resorts to such gimmicks and “genocide” individuals of the same sex? This happens as the scientists explain, in a simple evolutionary reasons – carriers and carriers of Spiroplasma ixodeti are females, and infected males unable to procreate, does not help the microbe to spread itself.

Here comes the fact that insects lay hundreds or thousands of eggs from which hatch individuals of both sexes, between which there is fierce competition for resources in the first phases of their development. Spiroplasma ixodeti “help” his current and future media, directly killing the males and forcing their sisters to eat them, thereby clearing the “living space” for individuals who can participate in their dissemination.

According to Fran is a Constant, this strategy of reproduction of the parasites has been so successful that she began to change the genome of the butterfly in one of the most infected regions of Kenya near the capital of Nairobi, where the prevalence of Spiroplasma ixodeti, almost no males.

Analysis of the genome showed that Spiroplasma infection ixodeti led to the merging of the “female” sex chromosome and one normal chromosome in the DNA of these butterflies that made it impossible for them to interbreeding with other subspecies of Danaus chrysippus living in Tanzania and Equatorial regions of Africa.

Interestingly, the normal chromosome carries genes that control the color of butterflies and their vulnerability to infection by spiroplasma. It is both “protects” the population of butterflies-carriers of the microbe from spreading in her genes that protects them from Spiroplasma ixodeti, and gives males to start a genetic “war” with the parasite.

How it happened and if it had any effect on this process themselves, by microbes living inside the cells of the milkweed butterflies, scientists do not yet know. The disclosure of this mystery, they said, will help to understand how parasites influenced the evolution of life, including humans.