Microplastic found in the air over the Atlantic Ocean 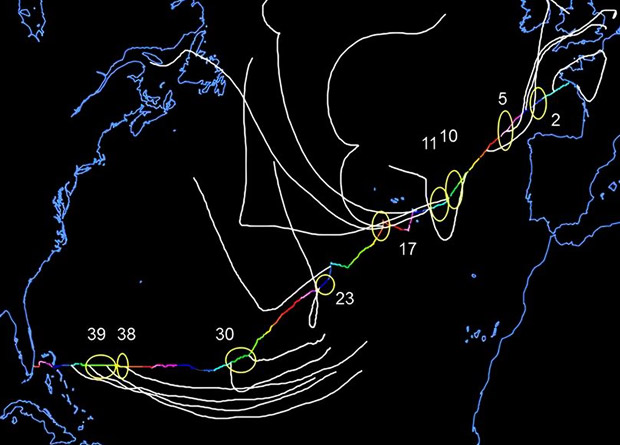 Plastic particles at least five micrometers in size are found in the air over the Atlantic Ocean. They get there with the wind, which picks up particles from the surface of the water and can be carried over distances of up to 1000 kilometers, according to a study published in the journal Communications Earth and Environment.

Microplastics are potentially hazardous to the environment as they can carry pathogens and persistent organic pollutants. Scientists pay special attention to microparticles floating in the world’s oceans: according to the latest estimates, about 5.25 trillion plastic fragments float on the surface of the world’s oceans. The toxicity and harm that microplastics can do to the marine ecosystem has yet to be carefully assessed, but plastic particles have already been found in the digestive system of marine invertebrates and are known to damage the gills of fish.

Despite the great interest in microplastics floating in the ocean, less attention is paid to the particles contained in the atmosphere above the ocean. Israeli and French ecologists and oceanographers led by Miri Trainic of the Department of Earth and Planetary Sciences of the Weizmann Institute in Israel decided to find out if microplastics are contained in the atmosphere over the Atlantic Ocean.

During the expedition on the Tara ship across the Atlantic and Pacific Ocean in 2016-2018, scientists took air samples at nine points over the North Atlantic. Samples were taken using a funnel installed on the ship 15 meters above the water. Air entered the funnel, and from it, with the help of a vacuum pump, through a pipe, it was fed to filters with polycarbonate membranes. There were 43 such filters with air samples.

The membranes were then analyzed by micro-Raman spectroscopy, in which a laser beam is directed at a particle, and the scattering spectrum of this beam can be used to determine what material the particle is made of. To make sure that they detect atmospheric particles, the scientists excluded polycarbonate signals from the analysis, since it consisted of filters, as well as the materials from which parts of the ship were made, in particular, cellulose, polyester and polyester.

Then the resulting spectra were compared with those already known from the library of Raman spectra of polymers. As a result, microplastic particles of at least five micrometers were found in nine samples (approximately 20 percent of all samples). The materials from which they consisted turned out to be typical of finds in the marine environment: polydimethylsiloxane, polystyrene, polyethylene and polypropylene. Scientists also found rutile (titanium oxide), a common dye.

To find out where these particles came from, experts took water samples in the same places where atmospheric aerosol was collected, and found there the same types of plastic as in the air. Taking into account the direction and duration of the wind blowing at the collection points and the fact that the density of particles is less than that of water, the scientists came to the conclusion that microplastic floats on the ocean surface, from where it is picked up by air currents and carried into the atmosphere, where up to two days.

At a typical wind speed of eight meters per second in those places, such particles can be transported up to 1000 kilometers. The researchers’ results indicate that the ocean surface can be a global source of microplastics in the atmosphere, and they get there with the wind, scattering sea spray.

However, earlier British oceanographers discovered that plastic is capable of not only floating on the surface, but also sinking into the upper layers of the Atlantic Ocean, to a depth of at least 270 meters.