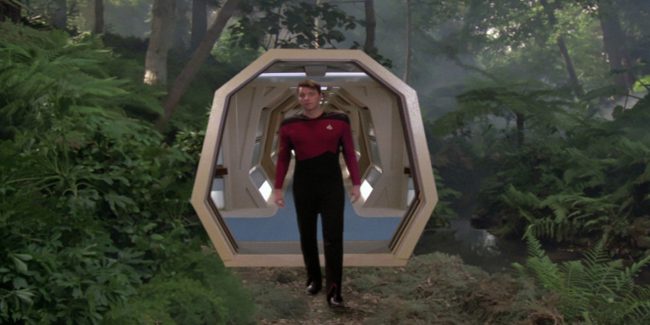 The space saga Star Trek is famous for the fact that many technologies described in series and comics of this Universe a decade ago appear in our everyday life after a while. Smartphones, phones folding beds, augmented rReality glasses, androids, touch displays and many other things more narrow are for us absolutely a commonplace. Using these things, we even do not think that all these things were thought up and shown in the movies telling us about the Enterprise ship travel. One of improbable by the opportunities the device which equipped spaceships of Federation of Planets and not only — the holographic deck. This place where any crew member can come, set the program and be transferred at the appointed time and the place. The Golopaluba creates very realistic picture, objects which appeared upon the demand of the visitor, it is possible to touch — to communicate to people, and apple, for example, to break and eat. Impresses, the truth? Apparently, the Microsoft corporation works on something similar.

Of course, in Redmond are not able to do so realistic holographic rooms yet, but work on as much as possible to improve the user experience based on interaction with the virtual and augmented reality. For this purpose use the current and last developments among which HoloLens and Kinect. On the display or the screen the picture, cinema or a game is displayed, and by means of projectors the padding image is output to walls. Thanks to the sensor of Kinect and cameras located on perimeters, the movements of the user are traced and shorthanded by the express software, allowing to ship the person in augmented reality thus.

The hardware and software system considers various parameters: an arrangement of objects in the room, depth and width of the room, illuminating intensity, adapting to specific conditions, adapting the events before the user’s eyes even under his movements.

To show the development in more visual way, developers published the video.

While everything is quite clumsy and bulky looks, but it is necessary to begin with something?

Planned to patent development several years ago, but registered everything only this summer, and published information on him only a few days ago. Of course, there is no guarantee that all this will become steep, actual and convenient soon, but the work which is conducted in this direction definitely pleases, if everything goes well, we can have movie theaters and video games of new type, and it is healthy too.