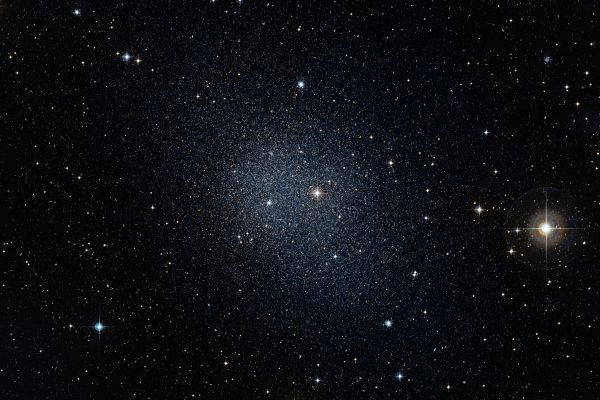 Our Milky Way is a rather large galaxy, it is surrounded by more than fifty smaller companions. A large part of them are dwarf spheroidal galaxies (dSph) – small, round and faint, almost free of interstellar gas and dust and unable to ignite new stars. They are believed to be widespread in the Universe, but only a few are known to us due to the difficulty of observing such rarefied and faint objects.

However, dwarf spheroidal galaxies also experienced their bright moments, short “15 minutes of glory”, during which they burst into mass stars. Scientists have shown that in the past, for the first time approaching the Milky Way, under the influence of its gravity, the substance in dSph became denser, and new stars lit up in it. Astronomers report this in an article submitted to the open online preprint library arXiv.org.

Takahiro Miyoshi and Masashi Chiba of Japan’s Tohoku University used observational data from the European Gaia Space Telescope, which tracked the movements of distant stars and galaxies with great precision. This made it possible to calculate the orbits in which the dSph satellites of the Milky Way rotate.

They turned out to be elliptical: either approaching our Galaxy, then moving away from it. Scientists have compared this movement with the formation time of the stars remaining in dSph galaxies, and found that it coincides with the first approach of the dwarf galaxy with the Milky Way.

For example, the Dragon Dwarf Galaxy (Draco dSph) first converged with ours about 11 billion years ago – and then star formation took place in it for the last time. In the Leo I galaxy, both happened two billion years ago, but neither one nor the other has produced new stars since then. They just didn’t have enough substance left for it.

The only salvation for dwarf galaxies from such a fate may be a decent distance from the Milky Way. The same Leo I and Draco dSph converged with its center quite closely, and star formation quickly depleted their resources. And, for example, dwarf galaxies in the constellations Fornax dSph and Carina dSph were not so close to the Milky Way, and new stars continue to appear in them even now.