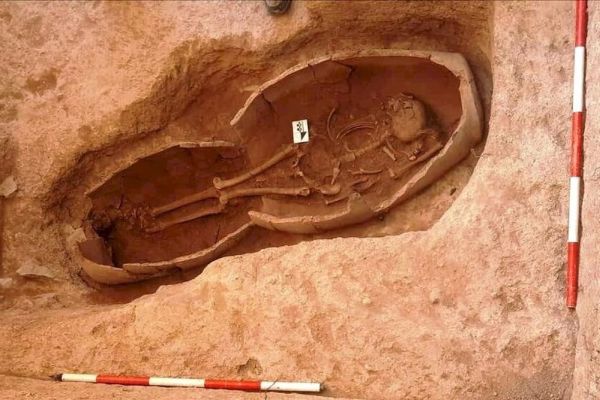 In Iran, a group of local archaeologists during excavations in the western province of Kordestan discovered an ancient human skeleton, buried in the Parthian era in a huge vessel.

According to the Tehran Times, citing the provincial tourism department, the find was made in the countryside by an archaeological team led by experts from the Research Institute for Cultural Heritage and Tourism.

She surveyed the construction site of the dam in the Sarvabad region. Several archaeological trenches were dug. In one of them, scientists discovered a giant vessel containing human remains.

He was probably killed in action – under his ribs there was a spearhead. However, this has yet to be confirmed in the laboratory. According to experts, the burial belongs to the Parthian era and was made in the period from 247 to 224 BC.

“In the Parthian burial tradition, giant jugs usually played the role of coffins,” explained the head of the research project Shokukh Khosravi. who died of his wounds. ”

The Parthian Empire, also known as the Arshakid Empire, was a major political and cultural power. It was located on the territory of modern Iran. It is believed that it was a very powerful and developed state.

At its peak, the Parthian Empire stretched from the northern reaches of the Euphrates, in what is now central-eastern Turkey, to eastern Iran.

The Parthians largely adopted art, architecture, religious beliefs, and even royal insignia from other powerful cultures. In particular, they made extensive use of Persian and Hellenistic traditions, skillfully diluting them with the traditions of regional cultures.