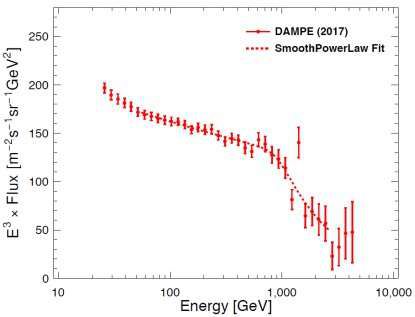 The mission of the Dark Matter Particle Explorer (DAMPE, also known as Wukong), presented the first scientific results on November 30. According to the obtained measurements of the flux of cosmic-ray electrons at an energy level of 0.9 TeV, a fracture is observed in the continuous spectrum. These data can shed light on the annihilation, or decay, of particles of dark matter, the authors of the study state.

The DAMPE experiment is a collaboration involving more than a hundred scientists, technicians and students from more than 9 institutes in China, Switzerland and Italy, working under the guidance of the Chinese Academy of Sciences. The DAMPE satellite is in orbit 500 kilometers above the Earth, where it was placed after launch, which took place on December 17, 2015.

During the first 530 days of scientific operations (on June 8 of this year), the DAMPE satellite detected 1.5 million electrons and positrons of cosmic rays with energies above 25 GeV. These data on the energy distribution of electrons and positrons are characterized by an unprecedented high resolution in energy and low background noise.

The presented graph (see photo) shows the first data published by the collaboration reflecting the distribution of cosmic ray particles in energy in the energy range from 25 GeV to 4.6 TeV. The nature of the spectrum in the energy range from 55 GeV to 2.63 TeV indicates a break at energies of the order of 0.9 TeV, where the spectral index (the value deposited along the Y axis) varies abruptly from 3.1 to 3.9. According to the authors, this kink can be associated with annihilation, or the decay of particles of dark matter, but additional research is needed to confirm this hypothesis.