Modern corals turned out to be the same age as dinosaurs 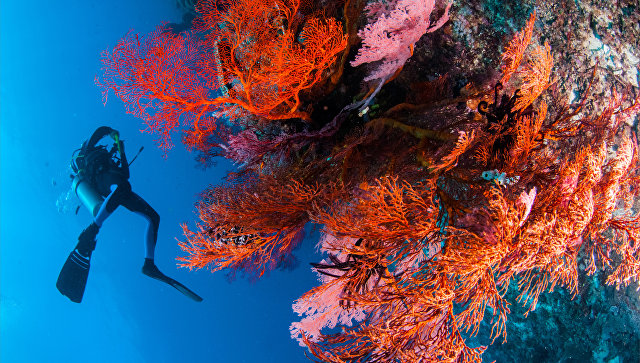 Modern corals were the same age as dinosaurs – their ancestors and symbionts appeared in the Jurassic period and were able to survive several mass extinctions of animals. This conclusion was made by geneticists who published an article in the journal Current Biology.

“Earlier, we assumed that modern corals appeared about 50 million years ago, our analysis shows that this happened much earlier – the ancestors of polyps and algae began to live together at the dawn of the dinosaur era, about 160 million years ago, they experienced several powerful cataclysms, almost completely erasing them from the face of the Earth, “said Todd LaJeunesse of the University of Pennsylvania (USA).
Corals – one of the most ancient and primitive invertebrate beings on Earth, whose ancestors appeared even during the Cambrian explosion. In the distant past they were predators, but today most polyps provide themselves with food, “growing” symbiotic unicellular algae.

The colonies of these polyps are one of the most sensitive indicators of climate change and ecological rearrangements in ocean waters. The slightest changes in the average temperature of water, movement of currents and acidity affect the ability of corals to build calcareous shells. In particular, warming of water and increase of acidity prevent polyps from capturing ions of calcium and carbon dioxide, which destroys their shells and negatively affects the strength of reefs.

For this reason, scientists believed that modern types of corals and their colonies appeared relatively recently, since any serious climate change, and especially mass extinctions of animals, should have had the greatest impact on polyps and their companions.

Ладжунесс have found out, that this idea was erroneous, having studied DNA of various kinds of seaweed from a sort Symbiodinium, living inside polyps. Scientists have suggested that they, like all corals that exist today, come from one common ancestor.

If this is the case, small differences in the sets of mutations in the DNA of modern algae will “give” scientists the time when corals and algae first established relationships. In parallel, biologists studied fossil remains of corals and shells of so-called dinoflagellates, unicellular algae, supposed ancestors of polybial symbionts.

It turned out that these algae really came from one common ancestor and at the same time were incredibly ancient. According to scientists, the first symbionts of corals appeared about 165 million years ago, at the beginning of the Jurassic period, when their ancestors experienced a kind of evolutionary explosion.

In subsequent years of separate evolution, as noted by Lajouness, the differences between these algae have become so serious that they should be divided not only into separate species, but also genus. In total, scientists propose to allocate 15 new categories in the family Symbiodiniaceae, which included algae “genus” Symbiodinium.

“The fossilized coral remains indicate that modern species of reef polyps have appeared around the same time as their symbionts, a coincidence we did not believe to be an accident, suggesting that the formation of such an alliance between algae and polyps allowed they quickly capture all the seas of the Earth and live to this day, “- concludes the scientist.