Modern laser weapons are not effective 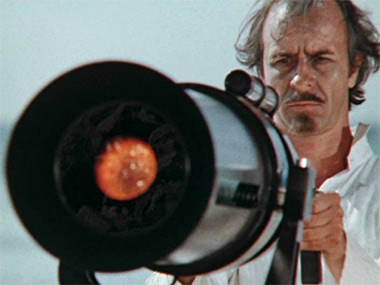 Laser weapons will be most effective for use in space, but to create real models of military lasers will take another few decades, said Wednesday President of the Academy of geopolitical problems Konstantin Sivkov.

Earlier, the head of the Russian Foundation for advanced studies Andrei Grigoryev said that the establishment of laser and beam weapons is much more complex than it seemed, when its development was just beginning.

Primary samples of laser weapons currently created, in particular, the Americans mounted a pilot installation on your ship “Ponce”. It is designed to destroy drones and missiles was conducted the tests, however, bringing this type of weapon to mind, it will take another few decades,” — said Sivkov.

He added that the laser weapon can be widely used primarily in space due to its advantages such as the lack of ammunition, which is quite costly to put into orbit. But the main advantage of laser cannon — able to shoot to the point of finding real purpose, which is especially important in space, where objects move at very high speeds.

“Laser weapons saves us from having to calculate the trajectory of the target, you just ask her current position and she will be destroyed. Furthermore, in space the laser beam is not influenced by different atmospheric effects, which makes it even more effective,” — said the expert.

At the same time, he stressed that to date, not solved a number of technical difficulties that do not allow to create highly effective laser weapon and use it.

“In order to deliver to the target the required amount of energy, there are two options. The first is a very short pulse of high power, which strikes the target and there is considerable damage due to the evaporation of materials, shock waves and so on. But this impulse needs a huge energy cost and extremely high quality mirrors, which is not so easy. And even with the use of these mirrors overheating in the installation is to achieve such temperatures, which can lead to self-destructive installation,” — said Sivkov.

The second option, he said, is a long-term effect of laser, involving the tracking for the exposure beam for 10-15 seconds.

“If we take into account interference in the form of weather conditions and atmospheric distortions, as well as the dispersion and fall of the power of the beam at a large distance, to provide such a long exposure is very difficult, if not impossible. That is why the US scrapped the project equipment of the aircraft Boeing-747 with laser weapons to destroy ballistic missiles, despite the fact that it was originally ordered 12 aircraft,” — said the President of the Academy.

In his opinion, over time, all technical difficulties will be overcome through the development of better and more powerful resonators to move to impulse effects, which will create a real combat-ready lasers that will be able to solve problems in space and on the Ground in 20-25 years.

The expert also expressed doubts about the feasibility of developing beam weapons as it, according to him, initially inferior to laser speed.

“The beam of energetic particles — electrons or protons — has a speed considerably below the speed of light, so shot at a moving target needs to be proactive, calculation of the trajectory. In addition, the generation of these particles is a significant problem, and their need to generate quite a lot, so at this stage it makes no sense to develop this kind of weapon, most likely, all efforts will be focused on lasers,” he concluded.