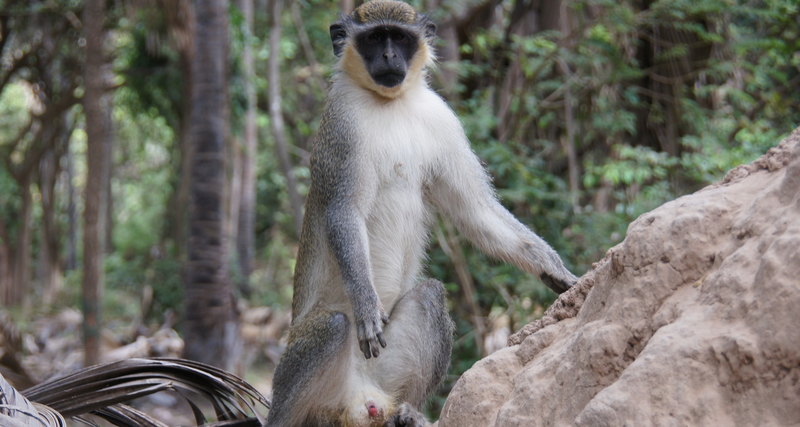 Green monkeys (Chlorocebus sabaeus) and vervetka (Chlorocebus pygerythrus) are two species of monkeys living on opposite sides of the African continent in Senegal and Ethiopia, respectively. The evolutionary paths of their ancestors diverged about 3.5 million years ago. But as it turned out, monkeys still remember the common “language”.

In the vervetka (eastern species) there are three different shouts warning the congeners about the approach of potentially dangerous predators: the leopard, the large snake and the eagle. Hearing such a cry, the primates who do not see the source of the threat behave according to the information received. The approach of a leopard means that you have to flee to the nearest tree with fairly thin branches. In the case of a snake, you must first stand on its hind legs and look around. “Air raid” requires an inspection of the sky to begin with, and then a search for a suitable shelter, such as a thorny shrub.

In the green monkeys, in the west of the continent, the first two shouts are exactly the same, but the one that should have notified about the eagle is not in use. There are no eagles in those parts that would hunt monkeys.

Scientists have made an amusing experiment. The green monkeys were shown a quadrocopter flying in the air. He, of course, was not too similar to the eagle, but moved in the air, and its size implied the possibility of some kind of threat. Dron flew at an altitude of about 60 meters above the animals caught off guard.

As it turned out, green monkeys in this situation scream almost as well as their Ethiopian relatives, although they did not find themselves in a similar situation, at least during the life of very many generations.

Moreover, if after this incident, the calmly feeding monkeys were allowed to listen to the noise of drone engines disguised nearby speakers, they distracted themselves from their troubles and peered into the sky, trying to see the source of the potential threat.

This shows that the signal system of these small primates is genetically inherited, and it is extremely conservative.

Read the details in the article published in Nature Ecology & Evolution.