Monkeys were convicted of creation of stone instruments of labor 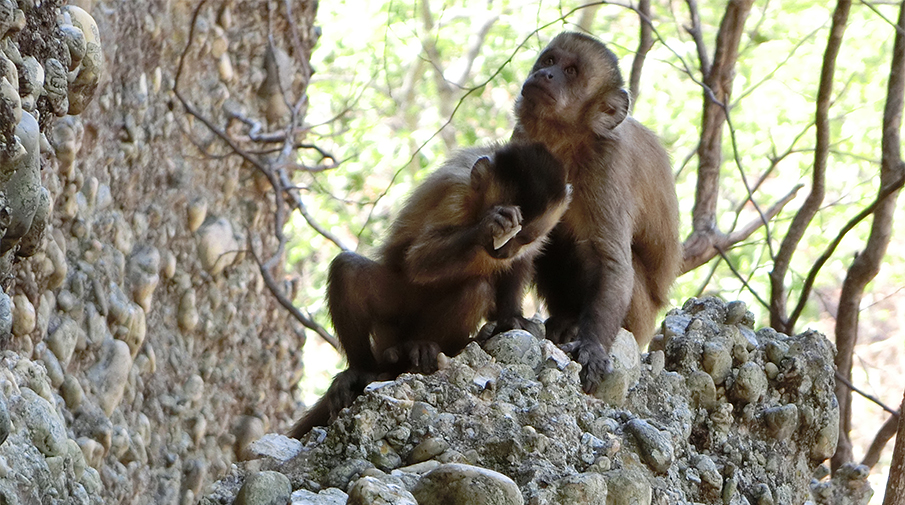 In 2014 Michael Haslam has hidden between two rocks in the northeast of Brazil and has filmed several monkeys. Without noticing the observer, monkeys are chernopolosy Capuchins — have begun to strike a stone in a stone. Primacies lifted small cobble-stones and struck with them blows about the surface of the rock as a hammer on an anvil. In process stones hammers often broke up.

When monkeys have left, Haslam has picked up several splinters of stones and has been strongly surprised. Many had keen edges, and they looked very similar to the human “tools” found archeologists.

Millions of years people and their ancestors used one stone to otkolotit pieces from another. Haslam very well knew such tools. He studied them in Australia, Honduras and India and even gave lectures about their evolution at the Oxford university.

Of course, monkeys did knives not specially. Primacies will never use the pointed stones to cut. And still, their unintentional creations prove that our own technology of processing of stones could have similar casual undertakings.

The chimpanzee, macaques-kraboyedy and other species of primacies use stones to break nuts and sinks of mollusks. But chernopolosy Capuchins from National park Serra-da-Kapivara exclusively skilled masons.

More than ten years primatologists Thiago Falotico and Eduardo Ottoni from São Paulo University observed how Capuchins used stones to square pebble, to increase holes in trees and to split seeds and fruit. Capuchins are sensitive to physical properties of the tools — they choose heavy stones as hammers and heavier for anvils. Monkeys are very dexterous. They change force of each blow depending on a condition of nuts which beat. Primacies are scrupulous and store the favourite tools in special places. Also chernopolosy Capuchins already long time are engaged in processing of stones. Haslam’s team showed that monkeys use stones to crack nuts кэшью, at least 700 years.

Also Capuchins beat stones the friend about the friend. Motives of this action aren’t clear. Monkeys lick and smell stones, perhaps, they look for some hidden nutrient — silicon or a lichen which grows on rocks.